Ljubljana Festival is celebrating its 70-year jubilee. In a year marked by the 150th anniversary of the birth of architect Jože Plečnik, the main venue for events will again be the Križanke Summer Theatre. From June to September the programme will feature world famous names, ballet and opera performances, musicals, chamber and symphonic concerts, the Ljubljana Festival Masterclasses, the International Fine Arts Colony, workshops for children and young people, the Ljubljana Festival on the Ljubljanica, and much more.

The highlights of the 70th Ljubljana Festival will include: Summer Night, the musical West Side Story, maestro Christopher Eschenbach, Béjart Ballet, La damnation de Faust under the baton of Charles Dutoit, Edward Clug, conductor Riccardo Muti, mezzosoprano Elīna Garanča, John Malkovich, the West–Eastern Divan Orchestra conducted by Daniel Barenboim with soloist Lang Lang, music from the films Lord of the Rings, The Hobbit and Harry Potter, the Pittsburgh Symphony Orchestra conducted by Manfred Honeck with pianist Hélène Grimaud, the tenor Juan Diego Flórez, the Thailand Philharmonic Orchestra conducted by Alfonso Scarano, violinist Lana Trotovšek and violist Maxim Rysanov with the Royal Philharmonic Orchestra of London under the baton of Vasily Petrenko, the gala concert of the Slovene Octet to celebrate their 70th anniversary, Vlado Kreslin, Laibach, and many more. The seventieth edition of the summer festival will be brought to a grand close by the Vienna Philharmonic under the baton of Finnish conductor Esa-Pekka Salonen.

Tickets are available for purchase at ljubljanafestival.si, the Križanke box office, Eventim ticket outlets and service stations of the Petrol Group.

Opening and closing events of the 70th Ljubljana Festival

The 70th Ljubljana Festival will be opened by Summer Night, which will be dedicated this year to Slovene poets and song-writers, marking the 60th anniversary of the Slovenian Song Festival. We will pay homage to writers including: Gregor Strniša, Miroslav Košuta, Svetlana Makarovič, Ciril Zlobec, Branko Šömen, Frane Milčinski Ježek, Elza Budau, Dušan Velkaverh, Milan Dekleva, Ervin Fritz and Milan Jesih. The summer festival will be brought to a close by the Vienna Philharmonic, an orchestra that features some of the world’s best musicians. Their excellence is evident from the numerous statements expressing admiration for the globally renowned musicians, while their uniqueness is confirmed by their work and form of organisation. They will perform under the baton of the Finnish conductor Esa-Pekka Salonen, and will be joined by the Austrian pianist Rudolf Buchbinder.

Performances by the biggest opera stars

Some of the biggest names in opera will be accompanied by the RTV Slovenia Symphony Orchestra and the Slovenian Philharmonic Orchestra. The soloists performing Verdi’s famous Requiem will include the Latvian mezzosoprano Elīna Garanča, who is adored on the world’s most prestigious stages, together with Bulgarian soprano Krassimira Stoyanova, Ukrainian tenor Dmytro Popov and the renowned bass Riccardo Zanellato. We will also be able to hear one of the most important contributions to opera from the second half of the nineteenth century, Carmen performed by the SNG Maribor Opera Chorus. The title role will be performed by the young Argentine singer Guadalupe Barrientos, who has already sung in Slovenia. Also singing arias at the 70th Ljubljana Festival will be Juan Diego Flórez. With a career that has seen performances in the world’s leading venues, this Peruvian tenor has become known as one of the greatest opera talents thanks to his expressive singing style.

The jubilee programme of the 70th Ljubljana Festival also consists of ballet evenings in the Križanke Summer Theatre. Béjart Ballet from Lausanne is returning to Ljubljana. This Swiss company was founded by the legendary choreographer and dancer Maurice Béjart, and his vision is being continued by Gil Roman. This will be followed by a display of ballet masterpieces by Igor Stravinsky, The Rite of Spring and Les Noces, performed by the ballet company of the Slovene National Theatre in Maribor. These two performances were choreographed by Edward Clug, a recipient of many awards and currently one of the world’s best choreographers, whose work has been enriching Slovenian culture for a number of years. Clug’s creations originate from Nijinsky’s hermetic choreographies and their progressiveness, with which the internationally acclaimed Romanian dancer and choreographer paid tribute to Nijinsky and his role in the development of modern dance.

The Slovenian creative team (producer Vesna Starina, text author Ambrož Kvartič, director Sara Lucu and dramaturge Mišo Mićić) came up with the concept for an original, contemporary, pop-rock musical entitled The Water Man, which deals with the problem of social networks. The creative team also enlisted one of Slovenia’s most successful and productive musicians, Neža Buh – Neisha. In the beginning of September we can look forward to the traditional concert by Vlado Kreslin, who is considered to be one of the most popular and prolific Slovene musicians currently active. There will also be the world premiere of the musical setting of the novel by Vladimir Bartol Alamut. It will be performed by the Slovenian avant-garde band Laibach in cooperation with modern Iranian composers and the RTV Slovenia Symphony Orchestra. After being founded in Yugoslavia, Laibach is the most internationally acclaimed band to have come out of the former communist countries of eastern and central Europe. The 70-year jubilees of the Slovene Octet and Festival Ljubljana will also be celebrated with a gala concert by the Slovene Octet, a male Slovenian vocal ensemble, which has been performing a very broad and diverse choral repertoire ever since its first concert.

Music and dance spectacular, with magical music from well-loved films

At the end of June and the beginning of July Križanke will host five performances of the famous Broadway musical West Side Story. The music for it was written by one of America’s most important 20th century composers, Leonard Bernstein, while the lyrics of this modern version of Romeo and Juliet, which highlighted America’s social problems in the 1950s, were written by Stephen Sondheim, one of the great names of musical theatre. In two concert evenings in August, the production of Star Entertainment will present the Harry Potter film series, The Lord of the Rings and The Hobbit. With more than one hundred performers, the first evening will be a unique event featuring Howard Shore’s music, which will bring to life the world of hobbits, elves and dwarves from Tolkien’s famous trilogy, while on the second evening the musicians will transport you into the world of Harry Potter with works such as Hedwig’s Theme, Double Trouble and the Hogwarts’ Hymn.

Some of the greatest soloists from the world of music and film will perform together with Slovenian and foreign orchestras. We will have the pleasure of listening to multiple prize-winners such as the violinist Julian Rachlin and the Slovenian violinist, last year’s winner of a Prešeren Fund prize, Lana Trotovšek. She will perform Mozart’s Sinfonia Concertante for Violin, Viola and Orchestra together with the Ukrainian violist, conductor and Grammy nominee Maxim Rysanov. Musical works will be performed by some of the most prominent musicians, including Chinese pianist Lang Lang, a wunderkind who became one of the most famous pianists of all time. There will also be a performance by the pianist Hélène Grimaud, who is admired by critics for her emotional interpretations, and the extremely respected Austrian pianist with a long career who is an honorary member of the Vienna Philharmonic, Rudolf Buchbinder. Another soloist on the piano will be Alexander Gadjiev, who was very successful in October last year at the 18th Chopin Piano Competition in Warsaw, where he won second prize and the Krystian Zimerman special prize for the best performance of a sonata. The two-time Oscar nominee and actorJohn Malkovich will be giving a recital on stage in the role of a music critic, working together with many other musicians. With his charismatic performance, he will act out the deprecating and sometimes derisive stance of music critics towards the works of musical masters whom we still enjoy listening to today.

The magnificence of orchestral sound

This year’s diverse musical summer will be enlivened by Slovenian orchestras as well as seven top foreign orchestras conducted by the greatest maestros. Festival Ljubljana’s resident orchestra, the Slovenian Philharmonic Orchestra, will be conducted in numerous concert evenings by Charles Dutoit, Christoph Eschenbach and Karel Mark Chichon. Another local orchestra, the RTV Slovenia Symphony Orchestra, will be joined by today’s most successful female conductor Oksana Lyniv. Performing here for the first time will be the West–Eastern Divan Orchestra, which is directed by the famous pianist and conductor Daniel Barenboim, the North American Pittsburgh Symphony Orchestra under the baton of their long-serving artistic director Manfred Honeck and the Thailand Philharmonic Orchestra conducted by Alfonso Scarano. The Italian maestro Riccardo Muti will conduct the Luigi Cherubini Youth Orchestra. Returning to Ljubljana Festival will be the London Royal Philharmonic Orchestra with Vasily Petrenko and the Vienna Philharmonic, which will be bringing the summer to a close with the Finnish conductor and composer Esa-Pekka Salonen. 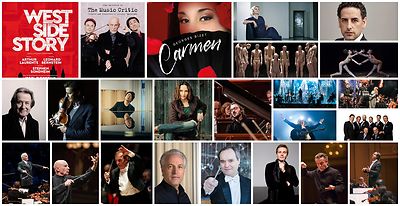