Festivals programming in time of conflict: Report on the survey on the war in Ukraine

More than three months after the invasion of Ukraine by the Russian army on 24 February, the survey "Festivals programming in time of conflict" unfortunately remains relevant and may identify some important needs.

EFA invited festivals to share their attitudes and proposals linked to the war in Ukraine, the actions they have adopted and the efforts they made in recent weeks and months. The survey also went beyond the Ukrainian war to see how festivals have reacted or are reacting to other conflicts in the world.

142 festivals responded to this survey, open from 14 April till 11 May 2022, showing the solidarity wave towards Ukrainians and other victims. The responses came from 38 countries, covering a balanced and broad geographic spread and representing various arts disciplines.

The questions raised the issues of the effects of the war in Ukraine, how festivals support their Ukrainian colleagues, hopes for a special solidarity fund and the cultural boycott on Russian artists.

The high engagement of the participating festivals was demonstrated by on the one hand the many projects and remarks shared within the open questions and on the other hand the number of open responses submitted as ‘Other’ on the closed questions, proving the desire to communicate about common concerns and ideas.
The survey clearly shows that the world is not black and white and highlights the grey zones. It above all shows the diversity of opinions, of ideas, of initiatives undertaken by the festival world.

The most important conclusion is that there is a great wave of solidarity towards Ukraine: the citizens, the artists, the festivals, the arts professionals. Festivals want to raise awareness of this terrible war and support the Ukrainian arts and culture sector.
On the other hand, festivals also pointed out that there are many people who are in need and require protection from authoritarian regimes that rule in their country, who have fled other wars and conflicts, or for various other reasons.

The great attention paid to Ukraine must continue in the upcoming weeks, months, years - who knows when this war will end - but we must not forget that we are all humans and that there are no second-class citizens except those who declare wars and those who support them. 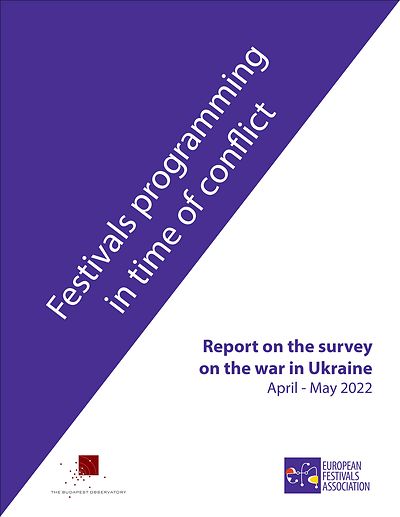