Next year Festival Ljubljana will host its first international piano competition, to be held from 25 February until 4 March 2023. Its artistic director is the acclaimed musician Epifanio Comis, while the president of the jury will be Dubravka Tomšič Srebotnjak, one of the 20th century’s most successful concert pianists. Talented young musicians therefore have the opportunity to present themselves to the broader public, and participation in the competition also serves as encouragement for their continued career as pianists. The first six finalists will receive prizes from EUR 1,000 to EUR 30,000. Applications for the Ljubljana Festival International Piano Competition are already in progress.

For almost three decades, Festival Ljubljana’s programme has included the Mladi virtuozi, or Young Virtuosi, international music cycle, which showcases talents and winners of various competitions and, at different times, has also supported a large number of youth orchestras. Masterclasses are also organised every year as part of the summer festival.

Active preparations are underway for the Ljubljana Festival International Piano Competition, which will be the first piano competition on such a scale in Slovenia. We will be hosting it between 25 February and 4 March 2023. The competition’s artistic director is the internationally acclaimed Italian musician Epifanio Comis, who said the following: “Many competitions resemble each other, as their aim is to find the best pianists. I would like the atmosphere at the Ljubljana Festival International Piano Competition to develop into a creative process, led by a jury consisting of world-famous musicians. Young pianists would thereby gain the opportunity to show off their talent. Our competition has already acquired a special place in the musical world as it has developed within a famous and prestigious European music festival. All competitors therefore have the opportunity to perform in a wonderful musical event, which of course also gives the winners an important advantage. Good luck to all participants!”

The world-renowned pianist regularly performs at various concert venues, leads masterclasses at important academies and universities, and has for several years been a professor at the Festival Ljubljana masterclasses. In addition to his rich career as soloist and conductor, he is also a director and professor at the Vincenzo Bellini Conservatory in Catania.

The aim of the piano competition is to provide young, talented pianists with a path to become top musicians and to share outstanding classical music interpretations with all lovers of this genre. It is an opportunity for new experiences, professional feedback and new acquaintances, which are essential in the world of music. The piano competition is open to pianists of all nationalities who were born between 1992 and 2006. A high level of musical ability is required. Finalists will receive greater recognition not just in Slovenia but throughout the world. Festival Ljubljana is an internationally recognised festival, and a member of various international associations such as EFA, ISPA and others.

Festival Ljubljana is also in the process of concluding agreements for numerous important recitals and orchestral performances for the first three prizewinners. These would take place within two years after the competition.

The deadline for submission of a complete application is 30 June 2022. The results will be published on the website of the Ljubljana Festival Piano Competition at the latest on 30 September 2022.

The qualifications repertoire (video recording) must include two etudes chosen by the competitor from the opuses of composers Frédéric Chopin or Franz Liszt (e.g. two Chopin etudes, two Liszt etudes or one Chopin and one Liszt etude). The chosen programme must not last more than 30 minutes. 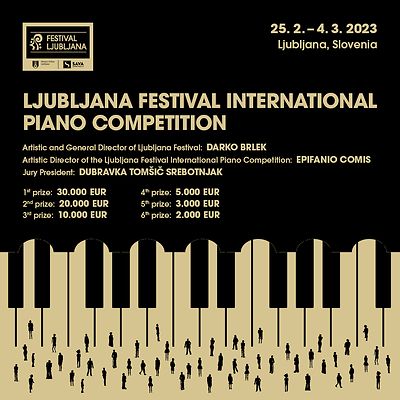