Heading to Northern Europe to visit Sweden for the “Swedish Festivals National Summit” that took place from 27 till 29 May 2022 in Norrköping, an event organised by EFA’s collective member Sweden Festivals in partnership with MAIS. The event aimed to encourage and inspire the Swedish festival makers about touring after the pandemic shutdowns.

After landing in Stockholm, the easiest way to reach Norrköping (pronounced Northchopin or Northchipin depending on the accent of the inhabitants) is to take the train. A journey of 1h30 through the majestic forests, large fields, and the beautiful nature of the country. Norrköping is a lovely peaceful city in the province of Östergötland in eastern Sweden, about 160 km southwest of the capital.

The “Swedish Festivals National Summit” was the first live meeting of Swedish festivals since the beginning of the pandemic. About twenty members of Sweden festivals came to Norrköping for the occasion. The event was co-organised with MAIS - Musikarrangörer i Samverkans (Music Organisers in Collaboration), the Swedish umbrella organisation that unites several nation wide networking organisations in the field of music - bringing together some eighty people during the weekend.

The conference included a series of interesting sessions on current organiser issues with a focus on the re-launch of touring and funding opportunities open to festivals. Different festivals’ stakeholders were present among which representatives of public authorities, arts managers, and artists. Sandra Wall, representing the municipality of Norrköping, who is also the focal contact for the UNESCO Global Creative Cities Network participated in several discussions and manifested her commitment towards festivals. EFA has been invited together with Finland Festivals, another collective member, to host one of the sessions. Audrey Brisack, EFA’s communication and network manager, presented the projects accessible to the wider community of festivals like FestivalFinder.eu and the EFFE Label, the EFFE Seal for Festival Cities and Regions and the brand new project EFFEA – the European Festivals Fund for Emerging Artists that was publicly announced for the first time. It was followed by the presentation of Kai Amberla on Finland Festivals: its structure, activities, and challenges.

Curtains up on the programme

Throughout the three days, Sweden Festivals curated in collaboration with some of its member festivals high quality concerts. One ensemble and solo artist, two duos and two bands performed in front of the guests and showed the variety of talents present in Sweden and abroad. The Friday kicked off on a latino note, first with latino baroque music with the Ensemble Villancico under the direction of Peter Pontvik (presented by Stockholm Early Music Festival), then with an amazing duo of guitarists from Brazil and Uruguay, Duo Siqueira Lima (presented by Uppsala Gitarrfestival). The second day began with the highly energetic concert of Mats & Morgan band, a duo formed by a drummer and a keyboardist (presented by Umeå Jazz Festival and Östgötamusiken), followed by a Hip-Hop and Soul performance of the All My Friends Are Stars Band. The band also organises a festival of the same name that stages incredible emerging artists, hidden gems living in the city of Gothenburg, that are not know yet and is one of Sweden Festivals’ new member. The programme concluded on Sunday with Julia & Theo, two gifted Swedish young artists playing respectively the piano and saxophone, mixing genres as folk, jazz, classical and modern music (presented by Västmanlands-musiken and Chamber Music Association) and finally with the concert of the pianist Natalya Pasichnyk, from Ukraine who now lives in Stockholm (presented by the Saxa Chamber Music Festival).

Erik Palm, the business manager of Sweden Festivals said: “It’s been a lot of fun. There was a great atmosphere all through the event. People needed to exchange, to network and that’s what happened. It was also very rich in terms of genres, with also folk and subculture festivals being present among the participants. To see everyone talking to each other was very nice. There were interesting topics, great speakers and very good music.”

Peter Eriksson, the President of Sweden Festivals concluded: “It was wonderful to meet again. During these three days, the complete engagement of everyone was so positive. The points that were addressed during the sessions were important topics and raised many questions. It was also important for us to have the presence of EFA as an international guest so that the European, national and municipality levels were all represented.”

You can download the full programme here (in Swedish). 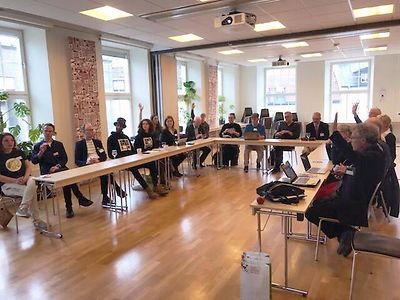