LJUBLJANA FESTIVAL: CANKARJEV DOM TO BE FILLED WITH BIG NAMES THIS SUMMER

This year’s jubilee 70th Ljubljana Festival, with a vast programme of more than 80 different events, is already in full swing. As is traditional, the festival began in Congress Square, this year with the Summer Night concert, which paid tribute to the writers of unforgettable lyrics on the 60th anniversary of the Festival of Slovene Song. Over the course of the next three months, Cankarjev Dom, the Križanke Summer Theatre and other venues will host numerous cultural events, including, at Cankarjev Dom, Verdi’s magnificent Requiem, a performance by the internationally acclaimed Lithuanian-born violinist Julian Rachlin, and Berlioz’s La damnation de Faust.

One of the undoubted highlights of this year’s festival will be Verdi’s Requiem, which will be performed on 3 July by the Slovenian Philharmonic Orchestra and Choir, conducted by Karel Mark Chichon. Under his baton, Bulgarian soprano Krassimira Stoyanova, Latvian mezzo-soprano Elīna Garanča, Ukrainian tenor Dmytro Popov and Italian bass Riccardo Zanellato will lead us through the story of the last judgement and intercessions for the soul’s salvation, in a performance which alternates energy and drama with refined, lilting melodiousness.

The following day, on 4 July, the Slovenian Philharmonic Orchestra will appear under the baton of the German pianist and conductor Christoph Eschenbach, considered one of the finest conductors working today thanks to interpretations that combine intellect and emotion. The soloist, performing on a Stradivarius from 1704, will be Julian Rachlin, “a virtuoso with heart”, as he is described by the media. Rachlin studied the violin at the private Music and Arts University of the City of Vienna, where he is now himself a teacher, and trained as a conductor with such famous names such as Mariss Jansons and Daniele Gatti.

La damnation de Faust by the great French composer Hector Berlioz, a légende dramatique for solo voices, choruses and orchestra that is one of the largest-scale works in the classical repertoire, will be performed on 15 July. The famous march, gentle love songs, ecstatic hymns and drinking songs will be performed by the combined forces of the Slovenian Philharmonic Orchestra and Choir under the baton of conductor Charles Dutoit. The role of Marguerite will be sung by the acclaimed French mezzo-soprano Sophie Koch, the part of Faust will be sung by Celso Albelo, one of the finest tenors of his generation, the charismatic Canadian bass-baritone John Relyea will appear in the role of the tempter Mephisto, and the student Brander will be portrayed by the British baritone Ashley Riches.

The festival runs until 8 September, when it will conclude with a concert by the Vienna Philharmonic. Tickets for the 70th Ljubljana Festival are already on sale at ljubljanafestival.si, the Križanke box office, Eventim ticket outlets and Petrol service stations. 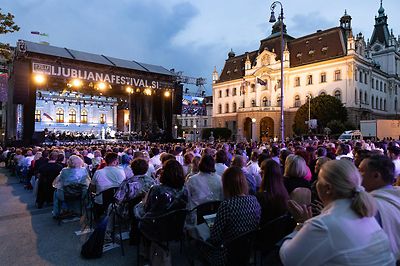