The 26th Gdańsk Shakespeare Festival is being organised at a particular time – during a war which is being waged across our border. We are impressed that our friends – artists and activists from Ukraine – are still conducting artistic activities. Productions are performed online, in town squares, and even in shelters, e.g. one of the first plays produced during the war, “Hamlet drama per musica”, was performed in the cellar of the theatre in Ivano-Frankivsk. Theatres have also been turned into places offering help to refugees. Ukrainian festivals are trying to be active despite the extremely difficult circumstances. The Gogol Festival is trying to support the artistic community of Mariupol and, with the help of multimedia interventions, to bring about a realisation of the enormous role culture has played in the development of this city. These are the reasons that pushed Gdańsk Shakespeare Festival to build the “Together with Ukraine” programme.

DEBATE: The theatre in times of war

Gdańsk Shakespeare Festival has decided to invite directors, creatives and representatives from Ukrainian festivals (Gogol Fest, Porto Franko from Ivano-Frankivsk) to address us, tell us how the Ukrainian theatre is functioning during a war and find out how citizens in Poland and in other European countries can help.

They have shared their experiences from the last five months of the war in Ukraine. They will discuss the changes that have taken place in European theatre as a result of the influence of the threat of war and crisis. During the debate, they presented the productions and activities conducted by Ukrainian artists. The participants got to reflect on what the “cultural front” is, how it operates, and how Ukrainian theatre influences Europe.

We want to give our friends from Ukraine a voice, to participate with them, and support them. The festival hosted “L_UKR_ECE” directed by Tetiana Shelepko, based on “The rape of Lucrece” by William Shakespeare. The premiere of this production was performed at the Shakespeare Festival in Craiova in Romania and a further developed version was presented in Gdańsk. The creatives will also talk about the process of the creation of the performance and conduct workshops devoted to the recovering of relations with one’s own body after traumatic experiences.

Furthermore, for people from Ukraine, a 50% saving was made on tickets for shows and 15% of the proceeds from sales of festival posters and gadgets on the basis of John Stanisci’s graphic works were donated to the “Gdańsk helps Ukraine” charity campaign organised by the Gdańsk Foundation. 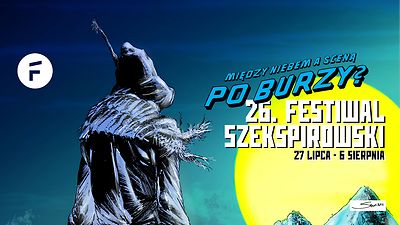