Ljubljana Festival: The second half of the festival Summer

The seventieth Ljubljana Festival is slowly entering its second half. But we can still look forward to many exciting musical and dance performances before the festival is formally brought to a close on 8 September by the Vienna Philharmonic under the baton of Esa-Pekka Salonen. The jubilee stage will host many internationally recognised soloists and orchestras, London’s Royal Philharmonic Orchestra with the violinist Lana Trotovšek and violist Maxim Risanov, to opera stars such as Anna Netrebko, Juan Diego Flórez and Plácido Domingo, and even bands such as Laibach. The programme will also feature evenings with film music of Harry Potter, and the premiere of the musical The Water Man.

The magical world of one of the world’s most famous wizards was further enlivened in the film versions of the story of Harry Potter by the original music composed by John Williams, Patrick Dole, Nicolas Hooper and Alexandre Desplat. Now we will be able to hear their works in concert form, performed in a Star Entertainment production. Performing in the unique setting of Križanke, the orchestra will enchant the audience with select musical excerpts, such as Hedwig’s Theme, Hogwart’s Hymn, and Dumbledore’s Farewell. The evening will be made even more special by visual and magical light effects, and the musicians will be joined on stage by a member of the films’ cast.
(19 August, 5 and 9 pm, Križanke)

Juan Diego Flórez will perform a concert of opera arias together with the RTV Slovenia Symphony Orchestra. Flórez first performed at La Scala in Milan, which opened the door to the world’s greatest opera stages, from Paris to the Metropolitan Opera in New York. The performance will be directed by the conductor Oksana Lyniv, who became the first female conductor on the stage of the Wagner Festival Theatre in Bayreuth, and acquired precious conducting experience in the role of assistant to the former conductor of the Bavarian State Opera, Kirill Petrenko.
(22 August, 8 pm, Cankarjev Dom)

The story of the musical entitled The Water Man is a modernised version of Prešeren’s narrative poem of the same name. The creative team also enlisted one of Slovenia’s most successful and productive musicians, Neža Buh – Neisha, to collaborate in developing this new, modern pop-rock performance, which deals with the issue of social networks. The new musical also differs from other musicals in its ecological stance, as all the costumes made by Dominika Monte, who is behind the Incognito Design label, are made from already existing, treated materials.
(23 and 24 August, 8.30 pm, Križanke)

Inseparable in private life and on stage, Anna Netrebko and Yusif Eyvazov are returning to the Ljubljana Festival. With her astonishing vocal abilities, thrilling tone and outstanding acting talent, Anna Netrebko is an idol of the opera-going public. The tenor Yusif Eyvazov began his international career with a sensational performance as Turiddu in Mascagni’s Cavalleria rusticana in Arena di Verona, and with Otello at Ravenna Festival. The iconic duo will be accompanied by the RTV Slovenia Symphony Orchestra, conducted by Michelangelo Mazza, who regularly collaborates with the couple.
(26 August, 8 pm, Cankarjev Dom)

THAILAND PHILHARMONIC ORCHESTRA UNDER THE BATON OF AN ITALIAN CONDUCTOR

The Thailand Philharmonic Orchestra will perform Phenomenon, the work of their compatriot Narong Prangcharoen, whose music is considered by critics to be modern, colourful and accessible. The concert will end with jazz-flavoured works by Leonard Bernstein (West Side Story) and George Gershwin (American in Paris). The performance will be conducted by the head and conductor of the orchestra, Alfonso Scarano, who has been artistic director and conductor for the Tuscany Opera Festival, and head conductor of the North Czech Philharmonic in Teplice.
(29 August, 8 pm, Cankarjev Dom)

This year, the legendary Plácido Domingo will once again enthral the Ljubljana Festival audience. The Spanish tenor and conductor has sung an incredible 150 roles over the course of his remarkable career, and to date has conducted more than 500 operas and concerts with some of the world’s top orchestras. At the 70th Ljubljana Festival he will be joined by the soprano María José Siri, who will be accompanied by the Slovenian Philharmonic Orchestra under the Spanish conductor Jordi Bernàcer.
(31 August, 8.30 pm, Križanke)

The London Royal Philharmonic Orchestra will perform under the baton of conductor Vasily Petrenko, who has also been its artistic director since 2021, presenting a programme of Viennese classicism. One of the solo roles in the Sinfonia Concertante for Violin, Viola and Orchestra in E flat Major, K. 364 (320d) by Mozart will be performed by the Slovenian violinist Lana Trotovšek, last year’s recipient of the Prešeren Fund Award, who will be joined in a solo role by the violist and conductor Maxim Rysanov. The programme will be rounded off with symphonies by Sergei Prokofiev, "Classical" and the famous Symphony No. 5 in C Minor, Op. 67, by Ludwig van Beethoven.
(1 September, 8 pm, Cankarjev Dom)

Laibach return to the stage of the Križanke Summer Theatre, this time accompanied by the RTV Slovenia Symphony Orchestra, in a performance featuring elaborate visuals and lighting effects, this year under the baton of conductor Navid Gohari.
(5 and 6 September, 8 pm, Križanke)

The 70-year jubilee Ljubljana Festival will conclude with the Vienna Philharmonic, an orchestra boasting 180 years of tradition and consisting of some of the best musicians from all around the world. On this occasion, it will perform a suite by composer Maurice Ravel, Le tombeau de Couperin, and one of his last, and undoubtedly the most renowned, works, the Piano Concerto in G Major. Performing as the soloist will be a pianist and an honorary member of the Vienna Philharmonic who is highly acclaimed by the critics, with a career spanning decades: Rudolf Buchbinder. The event will conclude under the baton of elite conductor and composer, Esa-Pekka Salonen, otherwise the main conductor of the London Philharmonic Orchestra, with Symphony No. 2 in D Major, Op. 43, by Jean Sibelius.
(8 September, 8 pm, Cankarjev Dom) 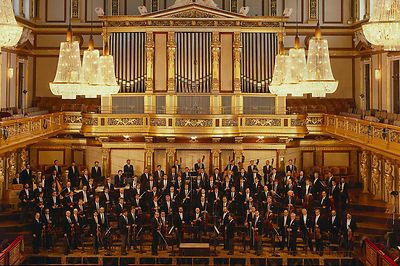