[Press release 20 September 2022] The European Festivals Association and 120 international festival delegates from 45 countries committed to continue to serve artists and audiences at the occasion of its 70th anniversary Arts Festivals Summit in Yerevan, Armenia from 11 to 15 September 2022

The European Festivals Association (EFA) celebrated its 70th anniversary Arts Festivals Summit 2022 from 11 to 15 September 2022 in Yerevan, Republic of Armenia. Hosted by the Yerevan Perspectives International Music Festival, the Summit marked a first joint step in the Association’s next decade between festival makers and festival stakeholders. In a fragile context marked by conflicts between Armenia and Azerbaijan, the presence of festivals from Europe, the region and Ukraine showed the importance of arts and culture as an important means to give stories of local realities and continue the dialogue.

The European Festivals Association’s (EFA) is Europe’s network of Arts Festivals. Since 1952, it brings together festival makers from all over the world to exchange, to work and collaborate transnationally, and to give arts and arts festivals a voice when it comes to the political dialogue at local, national and EU level.

The presence of an international group of festival leaders from all over the world in Armenia illustrates the importance of building on exchanges, listening and connections. 70 years ago, Swiss writer and philosopher Denis de Rougemont and Ukrainian conductor Igor Markevitch launched EFA as a peace project, a dialogue platform, an expression of hope and reconciliation. “We are together to listen and talk in the next few days about the arts, about the artists, about the need for dialogue, about audiences, about cities. About Europe in the world,” said Jan Briers, President of EFA.

120 festival leaders and stakeholders from 45 countries met live and joined online to share thoughts, concerns, needs, and artistic proposals during the Arts Festival Summit from 11 to 15 September 2022 in Yerevan, Armenia, hosted by the Yerevan Perspectives International Music Festival.

The Summit of this year carved an approach to re-positioning the festival world in the arts and cultural sectors so that they can fulfil their tasks as artistic and public space players. Mayors, business representatives, artists, journalists, and others participated in the conversation of EFA’s 70 Years-On Agenda and around the power of the arts and arts festivals to further involve European citizens in the development of Europe and its place in the world.

During the Summit, EFA launched two new important initiatives: The 70 Years-On Agenda and the EFFE Seal for Festival Cities and Regions.

Other concrete initiatives proposed to festivals and surrounding stakeholders were presented among which the new European Festivals Fund for Emerging Artists and the International Festivals Declare Emergency campaign.

The EFFE Seal for Festival Cities and Regions has been initiated by 7 leading cities: Belgrade, Bergen, Edinburgh, Ghent, Krakow, Leeuwarden and Ljubljana. The EFFE Seal aims to develop exchanges between festivals and their local territories that wish to associate and integrate their image and policy with a strong cultural entity. The 7 founding cities presented the diverse concrete applications and use of the EFFE Seal locally tested in the last 6 months, before the start of the signing ceremony. The EFFE Seal will also involve other cities in Europe and beyond.

A rich artistic and cultural programme

The programme of the Arts Festivals Summit offered various cultural and artistic activities in the city of Yerevan and its surroundings: many museums opened the doors of their venues, various concerts were planned, including Sergey Khachatryan and the Armenian State Symphony Orchestra opening the summit on 12 September. The programme also included a sightseeing tour outside of Yerevan like the Gehardavank Monastery or the Sevan Peninsula with Sevanavank Monastery.

The visit of Tsitsernakaberd, the Genocide Memorial complex, was an intense moment. EFA Members planted a tree together in memory of the victims of the Armenian genocide.

The Arts Festivals Summit Yerevan was a very emotional event under many aspects that delegates present will never forget. "The Yerevan Perspectives International Music Festival and many other colleagues - cultural institutions, art venues, artists - were looking to welcome such an international delegation for years. We are delighted to hear that many of them are thinking to come back to visit us soon," says Sona Hovhannisyan, General Manager of the Yerevan Perspectives International Music Festival.

“The fact that we are here in Armenia is because every two years we want to go to a country where it’s important that we support culture and the freedom of culture”, Euractiv quotes Jan Briers in its article covering the Arts Festivals Summit in Yerevan (https://www.euractiv.com).

The next 71st Arts Festivals Summit will take place from 23-25 April 2023 in Girona/Peralada, Spain.

If you would like an interview with EFA’s President, board members, or Secretary General, please contact: Audrey Brisack, Communication and Network Manager, audrey[@]efa-aef.eu - +32 472 52 72 32

If you would like an interview with the President or General Manager of the Yerevan Perspectives International Music Festival, please contact: Ani Hovsepyan, Administrative Assistant, ani.hovsepyan[@]yerevanfestival.am - +374 77162957 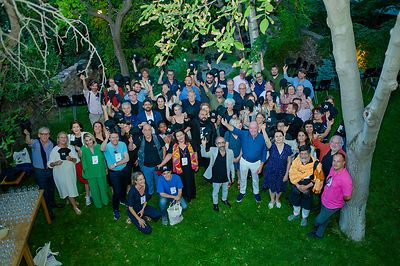