A picture of the Yerevan EFA Arts Festivals Summit, September 2022

There was a great deal of surprise when the European Festivals Association announced that its 70th anniversary Arts Festivals Summit would be held in Yerevan, the capital of Armenia, and I have lost count of the times in the last few months I have had to explain where both are; they barely register on the consciousness of the average Western European. But that was precisely the point. Europe is not just the area covered by the European Union and high quality festivals are found wherever the concept of Europe stretches. Last year's summit was at the other extreme, Galway in Ireland. Both had been postponed by world events: Galway because of the COVID pandemic, Yerevan because of the invasion launched by Russia against Ukraine.

Ireland and Armenia have much the same size population, around three million, so neither are enormous countries and all their people could fit into half of the biggest cities of Europe, yet they have cultural punch way beyond their size: Ireland in folk music, literature and beer, Armenia in music, heritage and wine. While Ireland points to its ancient bronze age and Celtic iron age history and its adoption of stout and porter beer from the 17th century onward, Armenia points to Mount Ararat towering above Yerevan and reminds us that wine has been made from the grapes on its slopes for six thousand years, never mind whether or not Noah and his ark found themselves stranded on top of it during the biblical flood.

EFA's Secretary General, Kathrin Deventer, is renowned for working her summit delegates hard, at least at the start. The programme leaves no room for slackness or the under-committed. For those come from the West, the first shock to the system is that most of the flights into Armenia's main airport land in the middle of the night. For those that arrived in the early hours of Sunday, there was in theory time for a brief sleep before a shock therapy tour of museums was launched in the afternoon. In fact, the American licensed chain hotels, with their strict check-in and out policies, took no account of time zones and expected immediate and punctuality with their rules, on pain of being thrown out into the hot streets.

Most of us managed to climb into the buses on time, if only vaguely conscious. We then encountered a problem common to all small countries. Their famous artists are not necessarily famous throughout the world, though they may have an important place in the national identity. So, as we trooped around Yerevan's cultural high spots, there was a degree of embarrassed bafflement. At what point does one ask a museum curator the most basic questions: what did the museum's subjects do, when, and why should I know about them? I was instantly in my comfort zone, though, when we arrived at the house (and big museum built around his modest dwelling) of Aram Khatchaturian, Armenia's most influential and popular Soviet era composer. I had seen him conduct his Second Symphony on a visit to London's Royal Festival Hall in 1977 and could explain to a few baffled colleagues that his way with the orchestra was as accomplished as his compositions. He is a little out of fashion at the moment; seen as too close to the Soviet establishment on the one hand, a little old-fashioned on the other. But that symphony and his Violin Concerto will stand the test of time.

The city's concert hall is named after him. A couple of nights later, after some gruelling and firmly directed talk we all assembled there for a concert by Armenia's newest orchestra, with a name that cleverly makes it sound like the oldest: the Armenian State Symphony Orchestra. Although I am a music critic by part of my trade, this is not the place to review the music served up to us with great ceremony in celebration of EFA's sojourn in the country. The middle work played that evening, though, was by the founder of one of the festivals hosting the summit. Stepan Rostmoyan's First Symphony was written when he was in his twenties, rather in the manner of Penderecki or Schnittke, and forty or so years layer it still sounds more than interesting.

Rostmoyan had not done with us, though. On a warm evening we were all herded onto the familiar coaches and ferried out of Yerevan into the foothills of Mount Ararat. As was becoming familiar too, most of us had no idea where we were going. The buses passed through landscapes dominated by grey earth, perhaps reflecting its volcanic origins, with very few trees and no obvious way of telling where one farm ended and another began, maybe a hangover from the Soviet days of collective farms. There were few coherent settlements between the city and the mountain but once we started to climb the road became more serpentine and the buildings coalesced into villages, many seeming very poor. Prosperity was hard to spot away from Yerevan itself.

After what seemed an age, the coach pulled to a halt at a junction in a village that seemed larger but no more prosperous than those we had gone through. To our right was a dirt road. It was late afternoon and the sun was sinking at our backs. We were ushered down the road, feeling a little silly and very alien in our urban clothes and wrong shoes, not the jeans and rustic shirts of the villagers, and we could sense the smirks of the small boys, the curiosity of the dogs, who tagged along in our wake.

It was a surprise, and something of a relief after a few hundred metres, to be guided into the grounds of a house that seemed similar to but much better kept than the others. From its back garden sounds of music - part folk, part jazz, drifted. Rather wondering what we were in for we wandered inside. There were hopeful signs of food and drink ranged on tables in the depths of the house. We gravitated towards them but no, we were urged up the stairs. Were we being taken to bed and bathrooms to freshen up after voyage? Not exactly. We emerged into a rather fine recital room, chairs laid out in concert formation.

Rostmoyan had rebuilt the house to become a rural retreat for artists, performers and composers: something common in Italy but desperately needed in Armenia. The piano, we were told, had been donated by Evgeny Kissin, one of the world's most acclaimed soloists. Kathrin tried hard to make us sit still and work but by then, she soon realised, we were rebellious. Instead a choir emerged from a side room. The Hover State Chamber Choir had, a few years earlier, been described by Krzysztof Penderecki as the finest a capella group he had heard and, as we listened to them sing from memory some highly complex and inventive music, I could only agree. They were and are truly superb. I do hope the assembled festival directors are even now pencilling them in for a booking.

As the light faded we ambled downstairs, accepted gratefully the glasses of Armenia's superb wine, and settled down in the garden for conversation and group photos (though throughout the Summit the official photographers seemed to have no idea how intrusive they were being, their clicking machines and flashes interrupting serious music constantly, however many protests there were. As so often, photographers did not realise the difference between a football match or pop concert and music that requires silent concentration - note for future: brief them fiercely before the event begins!).

Back in Yerevan news broke overnight that was highly disturbing but somehow not unlikely in retrospect, at least not to anyone who had been following the politics of the region for the previous year. Azerbaijan and Armenia have been disputing a region called Nagorni-Karabakh (of which there are various spellings, since it has been transliterated either from Armenia or Cyrillic script) openly ever since the Soviet Union broke up, in actuality for a lot longer. The last major flare-up in the conflict was only last year but an uneasy truce had held for most of 2022, ironically enforced by 3000 Russian troops. Later in the night, when we returned from the composer's house, Azerbaijan started shelling positions held by the Armenian army. At first it seemed a minor attack but as the next day wore on, it became clear that more than 100 soldiers had been killed. All this was a long way from Yerevan but it was sobering - reminding us firmly that Armenia is a small country, surrounded by much larger ones, four out of five of which have, throughout history, viewed it unkindly. With a population not much larger than Wales, it has to endure against whichever autocrat feels like threatening it. At the moment, that includes most of them. Only Georgia can be said to be truly sympathetic and that is mainly because it is in a position that is not much more secure.

The attack meant that the final events of the summit were muted. Live music was cancelled out of respect for the fallen. At EFA's concluding dinner, Armenia's Minister of the Economy - ah, isn't it good to find a country where it is the Minister of the Economy, not just the Culture Minister, who champions the arts! - gave us a sombre assessment and stressed the importance of the contacts made when an international gathering like ours brought its discussions to Yerevan. Our President, Jan Briers, not only an old hand at festival speeches but a senior member of the Belgian Federal Parliament and not a man to be down-hearted at the rough and tumble of politics, had tears in his eyes and a break in his voice as he thanked our host.

Thankfully, as I write, the situation in Armenia appears to be calmer so it would be wrong to end on a sad note. Instead I'll take my leave from the roof-top bar of the Holiday Inn, just off Yerevan's main square (actually a circle) where multifarious delegates tasted cocktails and the local wine until the staff needed to sleep even more than we did. As is so often the way, it took a voyage beyond very distant mountains for me to meet for the first time an instant friend from Bergen, almost the nearest city across the sea from my home in Caithness at the top of Scotland.

Oh - and by the way, there was quite a lot of work done too! Cities and festivals joined, found new partners for co-production and the swapping of expertise, talked about climate change, politics, money and audiences; very constructively but then we always do that. Doing so in Yerevan meant giving meaning to the words. 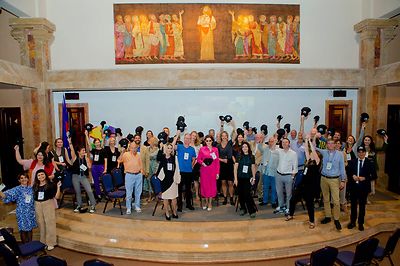