Sofie and Carlo arrived at the office at the same time one morning. This was a mistake. Neither wanted to see the other until caffeine was safely flowing into their bloodstream and that was usually easy enough to arrange since Sofie's room was several streets further from the centre than Carlo's.

But this morning Sofie was late and Carlo was early and they ended up on the same tram. Even by their standards of undeclared war, it would have been too rude to ignore each other. Sofie tried to hang back as they climbed out of the tram but Carlo was playing the gallant and was waiting for her. He even followed her into her habitual morning coffee shop, a move obviously designed to irritate.

Oxana was standing outside the main door of the office as they arrived. At first they took this as an ominous sign but then spotted the plume of smoke rising from the cigarette in her right hand and realised they were interrupting her routine as much as she was theirs.

“Right, you two. Don't bother to go inside,” Oxana barked fiercely and took a drag on her fag.

Oxana exhaled smoke in reply. “I've got a job for you two. I need you around town – the student areas, any building sites in the centre, vacant shops. Get up to marketing and collect a roll of posters.”

The remains of the cigarette was crushed underfoot. “Maybe,” said Oxana with unusual coyness.

Sofie took a sip of her coffee through the plastic top, just enough to make talking bearable at that time of the morning. “What's the poster for?”

“That stupid new opera of ours, the Director's inspired commission.”

“Of course it's not selling well,” If she hadn't been lighting another cigarette Oxana would probably have spat. “It's barely selling at all. 15% if we're lucky.”

“Is it going to be bad?” asked Sofie.

Oxana fixed her with a gimlet eye. “How the hell should I know but I wouldn't buy a ticket to watch five countertenors wail against percussion in Swahili, telling us we should care about Waldo the Necromancer, even if it is by Costas Pimpelbaum.”

“Or maybe because it's by Pimpelbaum,” murmured Sofie, who knew about such things.

“Flyposting is illegal, especially illegal in daylight,” Carlo pointed out. “Or have you cleared it with the mayor so we won't be arrested? It would not look good on my CV – convicted of criminal damage in my first job. I might want to go to America sometime.”

Oxana glared at her Italian intern, silent for a moment while she pulled the smoke and nicotine deep into her lungs. She waited till she had expelled it and flicked the ash onto the pavement before speaking. She had expected Carlo to buckle under the stare but he merely joined Sofie in taking a swig of coffee. “Are you refusing?”

Carlo looked across to Sofie. She seemed to be studying the joins in the pavement. Without lifting her eyes she said, “Yes, I think we are. You can't tell us to break the law, even a small one.”

Oxana trod on her second cigarette and strode inside to her office. She would have her revenge later.

“Going to be a fun day, then,” observed Carlo as he and Sofie followed her. 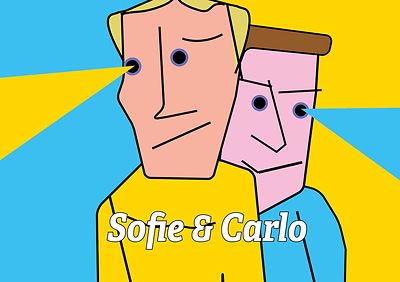