For Sofie and Carlo, Monday was the best day of the week. Nothing happened. The festival was dead. All the stages were quiet, the audiences had either gone home after the weekend or they were hanging around the cafés and bars waiting for festivities to resume on Tuesday.

Some had even gone swimming. Sofie threatened to celebrate her temporary freedom and join them.

Water had a bad effect on Carlo. He appreciated the theory of it but when it came to being on it, in it, or even drinking it, he would rather not. His flatmates were not convinced he was keen on being under it either. Carlo's riposte that 'showers were for rain clouds' did not impress.

According to Oxana, the fierce boss, the festival was never dead, just resting. She tended to assert this acidly when Carlo was found not doing anything 'in particular' or she had run out of cigarettes. Carlo didn't dare use the come-back he told Sofie he had given to Oxana – that, “with all that tobacco muck in her, she'll soon be permanently resting herself.”

Carlo took perverse pleasure, therefore, when Oxana told him to, “go and fish that girl out of whichever pond she's in and tell her to get back to the office, in her bikini if necessary.”

“No time to change,” he told her, taking the most literal version of the request. He tried to suggest that the towel was out of the question too but, wisely, Sofie ignored him. “So much for our day off,” she moaned. “What's the panic?”

Her long hair was still dripping when she made it back in front of Oxana.

“No idea,” The smirk was only partially wiped off Carlo's face by Oxana's glare when he and the sopping Sofie appeared. It was replaced, though, by his wail of injustice.”Why us?”

As Oxana had explained, the festival might not have performances on the Monday but it did have rehearsals. Specifically it had the get-in and tech run for a dance spectacular that included two knife throwers and two Afghan hounds, the very shaggy sort.

Sofie's worst fear – that the knife throwers had impaled the dogs and she was expected to remove the bodies – proved unfounded. They had missed. Carlo wished they hadn't. The dogs' reaction to the shouts of the knife artistes and the whistling blades had been to render the surface of the stage totally unsuitable for dance, however well sprung.

Later, as Sofie discarded the rubber gloves and rinsed off the smell of disinfectant, she decided that Carlo's childish plot had done her a favour. No clothes were made unwearable in the clean-up. 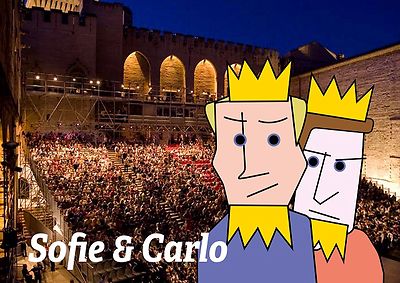