Preparations for the opening of the festival were feverish with only four weeks to go until the Grand Opening – or, as Carlo had renamed it, the Not-very-grand-any-more Opening. It was all very well going from an indoor to an outdoor festival. It was all fine placing performers at a notionally safe distance from each other on the stage. Everyone understood that this was going to be a peculiar experience for audiences and performers alike. The practicalities were less than practical.

If you were used to being first at a shared music stand, there was now not going to be a second to turn the pages. One union official had suggested violinists should be paid extra for this onerous duty. This was rejected fiercely by General Manager Oxana, who was busy telling Sofie that there was no need to rent extra violin parts. She was going to halve the violinists, not double the copies of the music.

Sofie and Carlo were at their summer office, as they called it; a large café table in a convenient square in the city centre. They were dividing up the dividing jobs.

“If you keep the soloists and conductors apart, I'll be the orchestra enforcer,” announced Carlo, using a pen as a dagger to demonstrate his preferred method.

“Fine,” agreed Sofie, “most of them don't like each other anyway, even if they usually pretend it's all love.”

“At least all the singers have been banned. No tenors to worry about this year.”

“And no sopranos who decide they want you as their pretty poodle for the weekend,” Sofie was in sarcastic mood. She was tempted to reach across and ruffle the Italian's hair but just in time remembered that it was against the virus rules – and would have meant Carlo getting his revenge in later, probably involving ice cubes.

“What are we going to do about the brass and wind players? All that spittle!” Carlo wondered.

“Oxana says we should put them into individual full-length plastic tubes – like see-through missile silos but with microphones.”

Sofie considered the problem. “Maybe we can add to the spectacle,” she suggested. “You lead the players to their seats, then the men who normally move the scenery for opera drop the tubes over the top of them with a crane. The players can be let out at the interval.”

Carlo was not impressed. “If anyone thinks I am going to be charge of cleaning the things, they're wrong. And then there's the issue of your conductors. You know what they're like. Sweat everywhere. Drip and spray, shout and splash!” 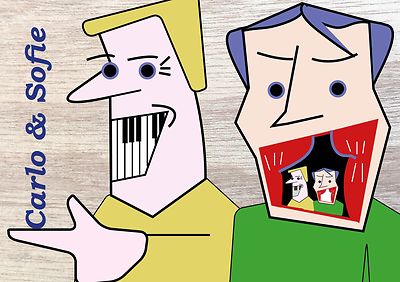