“I've been thinking,” Carlo announced, gazing at Sofie with furrowed brow, “and before you tell me it's a waste of time for me to even try, I'm being serious.”

Sofie sighed. “If you say so.” When Carlo became serious she knew something dramatic was coming,though she couldn't think what. So far it had been an uneventful Thursday afternoon in the festival office.

The Director was still recovering at home with a nurse from his experience of being locked in an orchestra lorry. So far the General Manager, fierce Oxana, had not shouted at them once, though she had curled her sarcastic lip a few times.

“What I don't understand,” Carlo went on, peering at the schedule spread across his computer screen, “is how we can be staging Waiting For Godot at the same time as the last act of Tosca.”

“Because Tosca jumping off the castle will land on Estragon.”

“Idiot,” laughed Sofie. “They're not in the same theatre.”

He looked up. “Oh yes they are. Malibran Stage. Tomorrow afternoon. Tosca finishes herself off at 18.25. Godot is being Waited For there from 18.00. That's what the production sheet says.”

“It can't be right.” Sofie came round to see for herself. She hated to admit it but Carlo had a point.

It was a point they both made to Thelma,the Stage Manager, to Christof, the Head of Production, and finally, with a hint of despair, to fierce Oxana herself. The reaction was the same each time. “Oh that's just a misprint. Don't worry.”

Which is why, at 17.45 on the Friday evening, the world's first ever riot between the supporters of Verdi and those of Becket developed.

In the stalls of the festival's grandest venue, tickets were waved in anger, mints and caramels were thrown, and one man (a Tosca lover who had unwisely told an incoming young Godotist that she could sit on his knee) was knocked senseless with a bottle of Aperol.

Sofie stood at the back of a balcony box, her face a mask of horror. Next to her Carlo grinned, aimed the camera of his phone, and streamed the brawl on YouTube.

Estragon was safe, of course. Tosca jumped the other way. 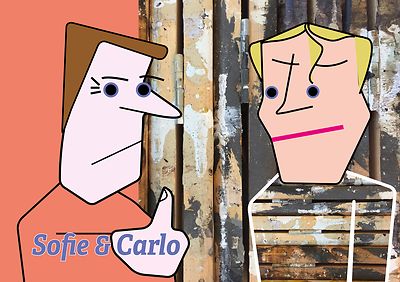