In the Friends of the Festival Hospitality Room Mm. Hortense Duchamp was having a meltdown. And when Hortense cherie had a meltdown M. Michel Duchamp had a meltdown too. After all, they owned this festival – or thought they did.

Their meltdowns were regular. At least two per festival. What they lacked in spontaneity, though, they made up for in oomph. The causes were varied and many.

This evening's little eruption (oh, well – let's do Hortense credit – major blow-up) was plastic. Given the noise she was making, one might have thought a pyroplastic flow of Pompei engulfing proportions was on its way.

In fact the plastic in dispute was the vessel that held her sad portion of cremant. The quality of the wine was not the problem (though had Mm.Duchamp possessed the sophistication she claimed, it should have been; the festival fizz could clean the barnacles off a ship's bottom). The problem was that it was inplastic, not glass.

Hortense ranted at Michel. Michel fetched the student holding the bottle. The Friends' Room Supervisor called The Office. The Office summoned Sofie because, naturally, no-one more senior was available or could face another Duchamp encounter. Sofie had never had one.

“I – we – have been at the heart of this festival for over thirty years, young lady, and I have– my wife has - never been so disgusted.” This was a straight lie. Hortense Duchamp was so disgusted at least twice a day.

“Plastic for cremant!” she spluttered, “Imagine! The indignity.”

“Really,” reinforced her husband, mollified a little by Sofie's youth and good looks (an unwise move, as he would find out on the way home), “would you serve cremant in plastic in your home?”

Sofie wanted to reply that if she could afford cremant at all she'd be happy to drink it out of anything, including the bottle, but instead just muttered, “I'll see what I can do,” and consulted the barman.

She returned without a solution, at least not one that would find favour. “The reason, Madame, is that safety regulations have changed since last year and we cannot let patrons take glass into the hall, and we know you like to continue to have wine during the music. Plastic glasses seemed the best answer.”

“Really!” exclaimed the madam, “what rot.”

At that moment Carlo, keen not to miss Sofie in trouble, appeared at her side. “Maybe I can help?”

“I doubt it,” Sophie sighed.

Carlo listened as M. Duchamp recapitulated the complaint, then bustled to the bar. He came back with an enormous pair of wine glasses (real ones) filled to the brim.

“If Madame and Monsieur are prepared to change seats, then you could follow me to to the President's box where such rules do not apply.”

Hortense looked at the size of the glasses being proffered and the volcano subsided. “Oh well, I suppose...”

Later, once the music had started and they were back in the office, Sofie grudgingly admitted Carlo had been inspired.

“And they'll be no trouble in the interval,” he assured her. “I gave them a pair of Royal Russians.”

“A lot of vodka underneath the fake champagne.” 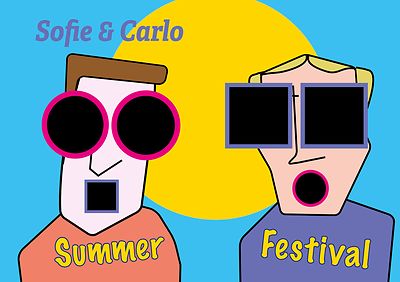