Sofie & Carlo - How to placate tenors

“The tenor is whining,” Sofie grimaced as she hung up the phone.

“So what's new? Isn't that what tenors always do, especially when they're singing?” pointed out Carlo with a shrug.

“So I've been told,” admitted Sofie. In truth she had not been in the festival world long enough to have dealt with enough tenors to judge. “But this one is whining at me.”

“Can't think why,” the sarcasm dripped out of Carlo.

Sofie sighed and reached for her coffee. It was ten in the morning and she was not ready for either sarcasm or whining, especially from Italians. The self-styled 'artists' she had been detailed to look after the night before had enjoyed an adrenaline rush and the drinks to go with it well into the small hours. Sofie was a mess on one sleep cycle and wine.

“He says he's lost his scarf, therefore he can't leave his hotel room. His throat will dry up.”

“Good!” Then Carlo was infuriatingly logical. “If he can't leave his hotel room without his scarf then it must be still in the room – otherwise he would not have left wherever he was last. Go and help him search.”

Sofie called the neurotic singer back. She made the calm suggestion but was met by a torrent of furious Italian. Shaking her head, she just handed the phone to Carlo who listened, a grin spreading across his face. When there was a pause he just said, “Si Signor,” and hung up.

“You have to understand,” Carlo handed her back the phone, “that every Italian man has to respond to his inner Pavarotti. But this man is our star tenor so he has to present his outer Pavarotti too. I expect his scarf is beautifully folded in a drawer next to his clean shirts but he's not going to admit it – or admit you, a young woman, to his room unless it is into his bed. If you found the scarf easily he would be mortified.”

“So how are you going to get him on stage?” Sophie asked practically. She didn't need a lecture on the absurdities of masculine insecurity – and definitely not when her head felt like porridge.

“Simple. He wants us to buy him a new scarf – a better one than he has already – but he will never say so. And he will reject the first three. If one is silk, he will want wool, if wool, it should be cotton. If blue he will insist on black – and so on.”

“What do we do? I'm too tired for this. Why don't we just tell the audience the truth: that he's a childish idiot?”

“Fans. We'll get the blame. Come with me. I'll buy you coffee and pills too.”

An hour later the distraught tenor was still pacing his room. His scarf had nothing to do with his agitation. It was precisely where Carlo had said it was. The trouble was sheer nerves. He was convinced he could not remember a note of the music he was due to sing in the festival's early afternoon recital. And because it was a recital he could not even blame a conductor. The panist would just have to play on his own.

There was a knock at the door. He opened it. That was his mistake. He opened it only a crack but that was enough for Carlo to insert his foot and shove.

“Signor,” he bowed with a flourish once the worried tenor had retreated, “we bring you solutions, courtesy of the festival. Please select a scarf of your choice.”

After Carlo, three immaculately turned out women paraded in, each carrying ten scarves, followed by Sofie bearing a tray of cream cakes and hot chocolate topped with chantilly.

“How did you do it?” Oxana, the General Manager, asked her interns in genuine admiration. They were standing at the back of the hall while the tenor finished his last song without so much as a flat A sharp.

“Distraction,” admitted Carlo, “and a friend of Sofie's who understands sale or return.” 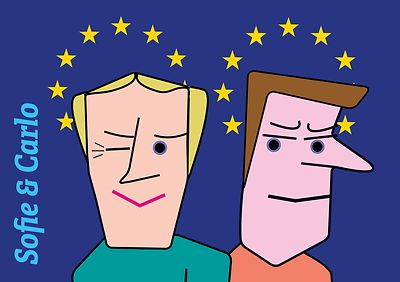