Sofie & Carlo - In case of fire

The rain, which had made life miserable for the hopeful hundred in the returns queue before the concert, had stopped by the interval and the audience had spilled out into the delightful courtyard of the old palace to find a balmy night and the prospect of a full moon.

Carlo sighed and leant against a pillar with a glass of sparkling water. Apart from that (an edict had come down saying junior staff were not to drink alcohol before the end of the event) he was almost as happy as at home in Italy.

Sofie was on artist baby-sitting duty – not the artists' babies, the endlessly neurotic artists themselves – so she was not in the way for once. Carlo relaxed and contemplated the audience in the line for drinks. He had deliberately tucked his staff pass into his shirt to avoid looking available for questions.

Six sips of water later his incoming text alert beeped. Carlo's sigh deepened. “Backstage. Now,” the text read. It was from the boss, not Sofie. He'd better do as it said.

The group that evening were a baroque ensemble, or 'gut pluckers' as fierce General Manager Oxana had labelled them. She liked her orchestras with steel. Sofie, who had spent years as one of the pluckers studying early music, had been scandalised, especially when the first two letters of 'pluck' had been substituted.

“So, where's the fire?” Carlo asked nonchalantly as he arrived in the artists' lounge.

“In there,” announced Sofie, pointing to Dressing Room One.

She shook her head. “No. But it's out now. The police have taken over. Oxana says you've got to go on stage and tell the audience the bad news.”

Sofie handed Carlo a hand-written note scribbled by Oxana on the back of the duty sheet. Carlo deciphered it. “Due to unforeseen circumstances the programme for the second half of this evening's concert has been changed. Letitzia Crumpfeld will no longer be singing a selection from Cavalli and Purcell. Instead Paula Kraznowicz will lead Il Jardino Del Bosco in Vivaldi's Four Seasons.”

“Oh dear, they won't like that.” tutted Carlo, “So what happened?”

“It went like this. When they all came off-stage, the theorbo player put his long instrument down across three seats. Enter la Crumpfeld, who sat down on it hard. Exit one theorbo with snapped neck.

“Very. So Roberto the theorbist tried to strangle her with the remains. She fought him off so he took his zippo lighter to her dress. Screams, consternation.”

“No. I got in first with the water bottle. But she can't possibly go on again.”

“Thanks,” laughed Sofie, deliberately misinterpreting. “But you can. Off you go.” 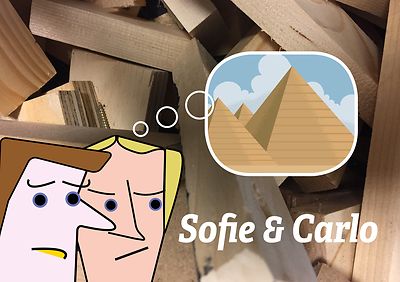