Sofie & Carlo - The Price Of Decorum

Steam rose from Sofie as she waited for the great conductor at the end of his rehearsal. The steam was not metaphorical; Sofie was not particularly angry – at least not yet. She was steaming because she had been standing in the rain on a hot day.

The Orchestra were rehearsing for their open-air gala but while they were protected from the weather by a canopy that was said to be a masterpiece of architectural imagination,

Sofie was not (protected, that is – she was, of course, a masterpiece).

For the first hour of the rehearsal she had listened with rapt attention as the orchestra played Strauss, Gershwin and Bernstein just for her. It was a closed rehearsal and, while curious members of the public could observe from outside the perimeter of the festival bowl, only she, as intern on duty, could sit in row ten and soak up the warmth of sound and sun. She had felt profoundly privileged.

And then, somewhere in the middle of the Overture to Candide, the rain came – not in the drizzle of a dull day, but in the torrents of a sudden summer storm.

When the music finished and the sun returned, Sofie steamed and her festival t-shirt clung like an Asian tourist to the guide with an umbrella.

“My dear, you should have taken shelter,” said the great conductor and gallantly draped his blue linen jacket round her shoulders.

“And miss the music? I'm not cold and it's only water.”

“You are very kind,” said the great conductor.

“Once again you are kind but perhaps you should change before we eat.”

“Oh, I'm not coming with you, I am just to show you to the restaurant so the director can take over.”

“Ridiculous!” the Maestro announced, “anyone who sits through a storm with me deserves to eat too. I won't allow anything else. But you must be dry.”

Which is how Carlo, who had not been away from his desk all morning, found himself half naked while Sofie's t-shirt dripped from a hanger in front of the window. His taunts that she just wanted to see his chest only partly compensated for the threats she had issued if he failed to surrender his top. Carlo didn't mind too much. It was ammunition for the future.

He minded a great deal more, though, when fierce Oxana fined him half a day's pay for being improperly dressed in the office. 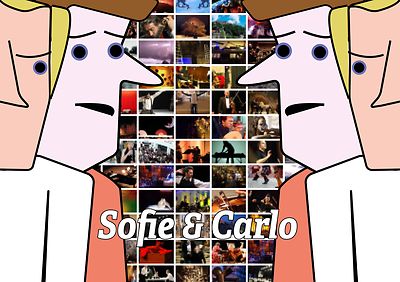