The last concert of the year was finished, the musicians were packing up and already the outdoor venues were looking like ghostly skeletons. Overnight the big trucks of the infrastructure companies would move in and the canopies, struts, seats and scaffolding would be dismantled by teams of men who knew their job - to erect and undo - but cared nothing for what happened in between. At first light the city's street cleaners would take over, soldier ants removing anything in their path. By the time Sofie and Carlo walked to the festival office in the late morning there would be barely a trace of the month's excitements, just a few limp banners advertising wonders that were now only to be found on the internet. So much instant history.

For the staff and the remaining performers, though, there was one last engagement. The last of the audience were on their way home at 10pm after the fireworks. At 11 their entertainers gathered in Bar Europa Sitienti for the final fling: the legendary festival staff party.

There was only one rule for the night; whatever anyone did during the party might not be forgotten but it must never be mentioned again. If news leaked, or if there were giggles around the office coffee machine the following week, the culprits would join the staff no presents list, which was much more frightening than its title suggested.

Sofie and Carlo were among the last to arrive, since their duties had been to wait around until all the sponsors had gone and the musicians had seen off the final well-wishers and general hangers-on. Only the players themselves and their actual partners were allowed to the party: no agents, students, old friends, or journalists. This party was intended to have no lingering consequences.

That was the intention, at least.

An hour after midnight, Sofie had had enough. Exhaustion was catching up faster than alcohol could outrun it. The only thing that had kept her there that long was the sight of fierce Oxana bopping frantically to 1990s techno, a throwback to the administrator's days as a teen metallic redhead in newly liberated Eastern Europe. Sofie could hardly blame her boss for wanting to get some release. Nobody on the team had been faced with so many crises and fought so furiously to overcome them. Still, her dancing style, somewhere between disco ecstasy and the funky chicken, was something to behold.

The sight of Carlo joining in with not much less abandon or more style was proof of something - Sofie was too tired to work out what. She felt a tap on her shoulder and half turned to find AD, Achile Djurekschyk, grinning.

"Perhaps this dancing is not for you?" he suggested.

He nodded. "Nor for me." He paused and they watched the ludicrous spectacle for a moment longer.

They left. Outside, the summer night was clear and, after all the noise of the festival fireworks and the party, the nocturnal city seemed a haven of civilised quiet. They walked the empty streets without hurrying, relishing the sense of a task completed, a jungle left behind.

After a while AD said, "I'm leaving tomorrow, going South."

"No point in hanging around. There's nothing more for me here."

"You're going to lie on a beach and draw hearts in the sand?"

"For a few days, yes. But after that... What are you going to do - stay and prop Oxana up or look for a job around the Baltic?"

"Not Oxana." Sofie laughed, "After tonight I can leave that to Carlo. I don't know. I think I might travel, do some sort of eco-project or post-grad course."

AD walked in silence, then, looking down a side street towards the river, said, "I think I have the perfect island."

"For life, the view, a terrace, the wine - a festival." He stopped, turned and smiled. "Want to join me?" 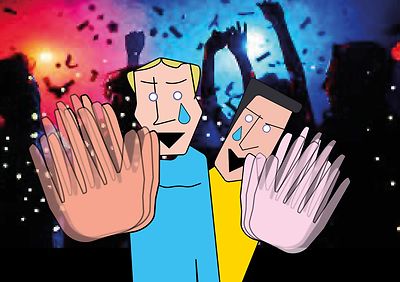