Carlo was wondering how to construct his morning. He could, after all, quite legitimately do nothing at all – go back to bed, play a video game, lie in the bath until his skin felt like soggy paper. He was an intern, not a full member of staff. His expenses were being paid by the festival, including an allowance for food (which in his definition included 'fermented fruit juice'), but he was officially unemployed in Italy. He was helping the festival out as a mere volunteer, just one with a letter of agreement that, honestly, was not a contract.

It was not a distinction Oxana, the General Manager, recognised and she would have been very fierce with any ministerial official who dared suggest Carlo was not her creature for as long as she wanted. It was hardly a surprise, therefore, when Carlo's phone rang imperiously just as he was stepping into the aforementioned bath, complete with bubbles. He looked at the device with disgust and considered not answering; no reason, though, why he could not converse and soak at the same time – as long as he didn't drop the phone below the foam.

“Yes, and that is how I want you,” Oxana informed him. “Ready pronto to take notes at my zoom meeting in ten minutes. With the Mayor, so look respectable. I'm emailing you the code now.” She rang off.

Carlo sighed. Goodbye to the hot water, adieu to bubbles. What a waste. Still, ten minutes, no problem. He lay back. Three would be enough. He let the warmth suffuse his limbs, loosen his mind. OXXAAANNNA, he breathed fiercely, insolently blowing the bubbles until they became a mountain near his knees.

Nonetheless he was at the kitchen table dressed in shirt and tie (and flip-flops) and logged onto Zoom with a good minute to spare, looking serious and ready to be the perfect assistant.

Oxana was already online but no-one else. She looked at Carlo in disbelief. She would have been prepared to bet at least three packets of cigarettes that he would be late and a mess.

“Good,” she said sharply. “Now I want a note of everything. It will need to be accurate because the Mayor refuses to allow recordings. You can type them up and send them to me for editing this afternoon. Is that clear?”

The Mayor appeared on screen. She was five years older than Oxana, with her short brown hair dyed red at the ends and a face that looked kindly to her electorate, her comfortable figure reminding them that she took care of the city with maternal concern. Oxana knew just as well though, that the exterior was just that: scenery. Inside the Mayor was an operator who could have taught the Medici family a thing or two about political plotting.

“Madam Mayor, what can I do for you?” Oxana asked. Carlo tried not to grin. He had never heard her try to sound deferential before.

“Ah, Oxana my dear. How good to see you. As you know, our little problem is getting more acute every day. I have had the Minister putting pressure on to say there can be no festival this season.

“But as you know I don't give in as easily as that. The festival is what this town is famous for, at least mostly, and to cancel three months ahead seems premature.”

The Mayor inclined her head to accept the thanks. “We must go on, though perhaps not in the same way.”

“What are you thinking?” asked Oxana. It was really a pointless question. The Mayor would never tell you what she was thinking – only what she had decided.

“I think we should have alternative festival finance that can benefit the city even if there are only token performances.”

“We make our customers an offer. We open a fund, an appreciation fund. We ask them to make a donation for the future citizens, in other words the children. By the way, we have unfortunately had to decide that your city money for this year's festival will cease next Thursday. However this new fund will reinstate it, so don't worry.”

It was not often that Oxana was left with nothing to say and her mouth hanging open. On the separate screen Carlo minuted – silence.

“Now the fund works simply. For every hundred euros a donor gives, the festival gets ten and a child gets a left shoe. If a donor gives two hundred you get seventeen and the child gets a right shoe to complete the pair. Simple, as I said.”

Carlo couldn't resist. “And the rest?”

The Mayor shrugged. “We all have expenses.” 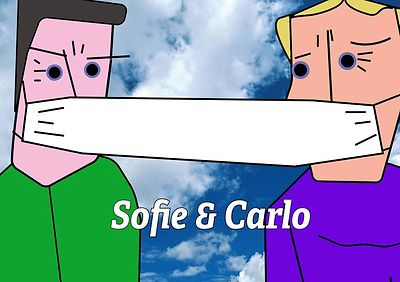