Sofie and Carlo, festival interns extraordinaires, were surrounded by boxes. Standing in what was left of the centre of the main office, they felt rather like fugitives caught by circling police cars. Around them the boxes continued to multiply as delivery drivers piled them up from a succession of vans, while the General Manager, Oxana, stood in the doorway of her office shouting fierce orders at them.

The boxes mounted, some reaching almost as high as Carlo's, admittedly diminutive, head. Sofie still overtopped them, like a lighthouse caught between cliffs and fog.

“What are they all?” Carlo complained plaintively, hoping that at least a pathway to the coffee machine would survive.

The light of Sofie's eyes circled the innermost boxes, searching out labels. “Leaflets,” she announced, “programme leaflets, subscription leaflets, friends of the festival leaflets, hang on...” she paused, “are these for the new programme, Oxana?”

A raucous grunt, roughened by cigarette smoke, reached her from outside the ring. “They ******* well better be. Open one.”

Carlo reached up and tried but was not tall enough to slit the tape on the top box. He also needs a knife and was mortified when Sofie stretched easily and used her long nails to cut through the plastic. She pulled out a sample brochure and threw it over the cardboard wall to Oxana.

An even stronger set of ****** expletives turned the air blue. Carlo winked at Sofie. “These are the old pre-COVID ones then.”

Meanwhile Sofie had examined the other labels. “These are our new protective festival uniforms.” She repeated her nail slashing technique. “Look – special festival logos on our face masks and Euro-stars on the fingers of our rubber gloves. Very swish!”

“I'm sure you'll look delicious in them,” smirked Carlo, then ducked as a packet of masks flew past his ear.

Oxana yelled out, “so how many of these blasted things have we got? Are there any of the right ones?”

Half an hour later, when Carlo and Sofie had opened and inspected every box, they reported back with depressing news. “There are five hundred per box and fifty boxes.”

Carlo went on. “There are ten cartons of the new programme. The rest are useless.”

A delivery man had just placed the last of his load of face masks onto the stack by Sofie when Oxana grabbed him by the straps of his overalls and dragged him back. “This lot,” she waved at the offending boxes of redundant paper, “you can get out of here now – straight to recycling.” She glanced across and caught Carlo grinning. “And you can boil him down to pulp too, while you're at it.”

The slam of her door shook the windows. 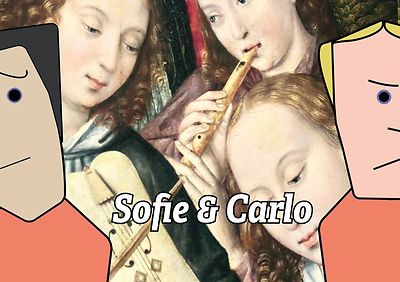