The Inadvertent Power of Art

To be Artistic Director of one of Europe's great festivals, with its history of music, theatre and occasional open-air wash-outs, should surely be an honour to relish. It calls for flair as much as diplomacy, daring as much as a sense of proportion. Most of all it should bring with it a sense that the Director is excited, having fun and expects everyone else to be.

It was slightly strange, therefore, that most of the time this AD was nowhere to be seen. In the midst of the virus crisis there were constant requests for interviews – not just from arts journalists but from the world's television and radio stations anxious to know his thoughts and find a nugget of inspiration. All were gently but firmly rebuffed and passed on to the General Manager, Oxana, who dealt with them fiercely.

At his best, public appearances had never been AD's style (he was always known as AD, partly because that was his job title but largely because nobody could remember how to say or spell Achile Djurekschyk) but these days he was not at his best. A night locked by mistake in an orchestral van during last year's festival had left him a nervous wreck, terrified in equal measure of the dark, enclosed spaces and musical instruments.

This made attending concerts a challenge, musical theatre much worse. He was only really happy these days at al fresco poetry readings with a cappella accompaniment. Sofie had been assigned to coax him through to the end of that festival but even her powers seemed to be fading in the days of antisocial distancing. She couldn't meet him to coo soothing encouragement and his phone was rarely switched on.

On a Sunday morning, well into the months of emergency, it all came to a head. AD was seen (alone of course) in the empty neoclassical amphitheatre that served up the festival's more spectacular presentations that required fireworks and no roof. He was declaiming – at least the three cleaners who were his audience assumed he was. No sound came, only gestures that reminded the older among them of the late great Marcel Marceau.

He seemed to be weeping. A former dancer himself, he was expert in conveying meaning without sound. At first the cleaners watched in fascination. Then they took a few videos on their phones and tweeted them before resuming their brushing and binning. The tweets took flight. The world watched.

Soon, against the rules, people began to walk to the amphitheatre, keen to see the show for themselves. AD's existential performance had, to use an unfortunate metaphor, struck a chord, probably something in B minor.

None of this was intentional, of course. AD, made claustrophobic by his home walls, had just meant to go for a walk. Along the way the sadness and frustration had started to bubble out. His feet had taken him along the river and then, on their usual route, to the amphitheatre. Once at its centre his old performer self had taken charge and, as he thought, in the solitary splendour he had shown how he felt.

AD did not realise for days after Sofie and Carlo had shepherded him home, rather like a couple of collies driving a reluctant llama (approaching but not touching), that he had become the symbol of the time. The world thought it had been a brilliant expression in an iconic setting of viral alienation. Donations poured in. 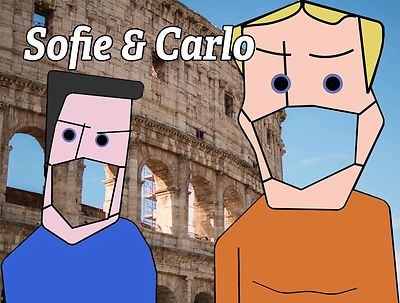