The Trials of Lockdown Mornings

The apartment was simply not big enough for three people all day, all night, even if they were family or lovers, or just friends you really liked. For three women who hardly knew each other it was already proving a strain after only a week. The problem, Sofie thought as she emerged from the shower and tried to find her own towel on the over crowded wall hooks, was the clash of habits – and the clash with Inez. Christina wasn't so bad.

Sofie dried, wrapped the towel around and attacked her wet blonde hair with a comb brush. Normally, when they each were going to work, Inez was an irritant but not a problem. She came from somewhere north of where sherry is made in Spain and she worked for an airline at the small airport that served the festival's city, so she was usually in her uniform and out of the house in the morning before Sofie and Christina needed the bathroom. Yes, she left it looking like a wooden town after a tornado but order could be restored without too much effort.

Now, though, the airline was not flying and Inez was at home and, like them, working from the shared sitting room – or the kitchen, or the hallway, or her bedroom with the door open. And she talked, loudly, incessantly and with no sense of what was important and what was dementingly trivial. Inez made Carlo, thought Sofie ruefully, seem like the perfect companion.

Worse, much worse, was that Sofie could not tell Inex to shut up. The woman was being paid to talk all the time. She was now the prime call centre contact in the area for her airline's customer service department. People actually wanted her to talk to them all the time. It was incomprehensible.

It was also impossible to concentrate on your own work anywhere in the flat even if you shut all the doors. Once it got into the consciousness, the incessant drone of Inez's monotone voice became like the buzzing of a fly or the dripping of a tap; wherever it was coming from you were aware of it.

Sofie emerged from the bathroom, crossing with Christina, who nodded long-sufferingly as they passed. Christina was a town housing manager, the only local of the three women and ten years older. It was her flat. Inez and Sofie were just the lodgers occupying what had been spare bedrooms (or, as the estate agent's description would have put it, the dining room and child's playroom).

Renting out the rooms had seemed like a great idea for having a bit of younger company and easing the pressure of expenses. Now it was torture from which Christina would not be freed for as long as the town was in virus shutdown. No movement, it seemed, except between Inez' vocal chords.

It was still before nine when Sofie set her laptop on the table in the sitting room and logged on. Her Skype group ring chipped in officiously. Her shoulders slumped and she swore. 8.45 team meeting. She had forgotten – again.

'So glad you could join us.' General Manager Oxana's fierce and acid tones greeted her as the other festival staff's faces gathered. 'We were hoping you would. There's a little list for you on the email. Website messages in English, German, and anything else you think you can write in. Carlo and I have discussed them already. By midday please.' And the screen went blank.

Sofie had just abandoned the table miserably to make herself coffee when her phone started vibrating. She looked at the screen ident. Carlo – all she needed. 'Yes?'

'Yes indeed!' he announced smugly. 'Maybe today I am not the one in Oxana's guilty book.'

She could feel her fury rising. 'I suppose you think it's funny.'

'Not at all. You know you have my eternal support.'

That was the end. Sofie had enough sense to hurl her phone into the armchair, not onto the hard floor, but her emotion was the same. By the time the water for the coffee was boiling she had articulated it in a shout. Sadly it was too full of ***, bleeps and !!! to be reported here. From the bathroom Christina reflected that Estonian must be a good language for swearing in. 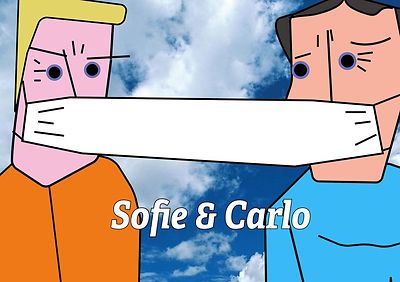