If the days of total isolation were coming to an end and people were starting to think about heading for airports once again (though more out of necessity than pleasure), for Sofie the prospect of home was still distant. There were still two weeks to go before the festival started. Even in its truncated form it was due to last a month. Then there would be the inevitable wind down and clean up before her internship came to an end and she would be free to return to Estonia and the embers of her old life.

Those embers had last seen flame in the freezing distant month of January. Her Talinn life was beginning to feel like one of those children's fairy stories that started with 'once upon a time'. Once Upon A Time, she reflected ruefully as she walked home from the festival office one evening, she had even had a boyfriend. What had happened to him? She had been the one to dump him back in the certain days of December, when the future felt within her control. Now the decision did not seem quite so clever. Should she try virtual reconnection?

From behind her on the street came the sound of footsteps hurrying. She stood aside to let whoever it was scurry past without breaking the social distancing rules but instead the footsteps slowed as they caught up.

“Hi,” called a slightly breathless male voice. Sofie turned and looked back. At least she was not being followed by Carlo. She slowed and allowed the Artistic Director to catch up. “Thanks,” he said, stopping and pausing to recover.

He shook his head. “No, at least nothing more than usual.” Sofie looked worried for a moment. She knew that AD had been under great strain and that his mind did not always seem very stable. But he smiled. “I just saw you walking away down the street and thought it would be pleasant to talk to you, now that such meetings are allowed.”

“Within the rules,” she pointed out.

“Oh yes, within the rules,” AD pulled a face mask from his jacket pocket. They resumed their walk. “All coming together in the office?”

“Just about,” admitted Sofie. “I expect we'll be ready.”

“It always feels unlikely at this stage, only two weeks to go. And this year nothing is certain but we'll make it.” They walked on. AD was sounding unusually cheerful.

“Do you live near me?” Sofie asked, wondering why AD was walking with her.

“I don't know where you live,” he told her, “but I often come this way and then walk along by the river.”

“It can be peaceful.” They had reached the end of the street and could see the river beyond. “You know, now that summer is here and we are allowed to sit outside again...”

“Let's go and have a glass of wine in that bar by the water.”

Sofie looked searchingly at AD, slightly stunned by the sudden invitation. But then she said, “Why not!”

AD smiled. “I think we both need it.” 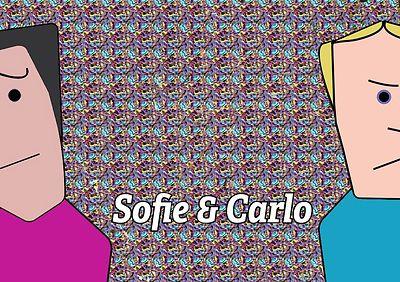