EFA Festival in Focus | Simon Mundy, in interview with Jesús Cimarro, Director of the International Festival of Classical Theatre of Mérida, looks at the festival’s history and current success

Some readers who have seen other articles in this series may have gathered by now that I have a fascination with the heritage of Greece and Rome. It will be no surprise, then, that I can write about the Merida Festival of Classical Theatre with enthusiasm, knowing that to do so I have to fill in the history.

Merida is the capital of the region of Extremadura, in the centre of Western Spain, bordering Portugal, just as it was once the capital of Lusitania in Roman times. The name comes from Emerita, the name given to retired soldiers from the legions of Augustus, the first Emperor, who gave them land because they merited it as veterans. If they thought they were entitled to hang around and grow olives and grapes in their retirement they were soon disillusioned, however. Their real task was to protect the roads that carried the gold and silver from the mines in the mountains. The city grew fast and within a couple of centuries it was the largest in Iberia. 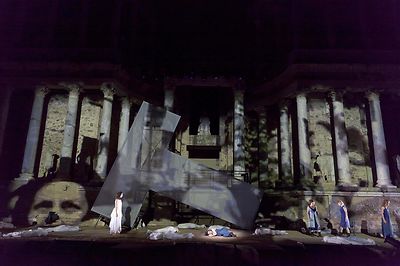 The Visigoths, Muslims and Catholic Christians all appreciated the city in their turn and it remained remarkably intact until Napoleon arrived and let his guns do their worst. Enough remains, however, for it to be one of the best preserved examples of Roman provincial city building. Its original bridge across the River Guadiana is still in use, as are its reservoirs. The city hosts Spain's National Museum of Roman Art. For the purposes of this article, though, its greatest treasures are its theatre – built by Marcus Agrippa, who also commissioned the Pantheon in Rome - and amphitheatre, and the temple originally dedicated to the cult of Augustus (soldiers like glorifying their commanders if they hand out bonuses) but now named for the goddess of the moon and hunting, Diana. 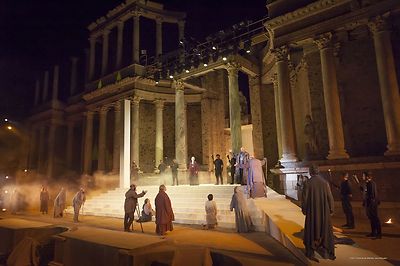 The theatre is extraordinary because, rarely for ancient structures, it still has the solid colonnaded buildings of its backdrop, meaning that its entrances and exits to the stage are much as they were two thousand years ago. This survival is both the raison d'être and the main venue for Merida's Festival. The potential was recognised early in the last century, with the first events being held in 1933. The horrors of Spain's politics in that period soon intervened, though, and it was not for another twenty years that the festival re-emerged on a firm footing.

In the sixty-five years since, the festival has grown and developed, not only in size but in artistic philosophy. There is plenty of Euripides, Sophocles, Plautus and Terence in Spanish translations of the original plays but the real focus is on how modern writers respond to the stories of the classical age. Modern is a relative term here. Recent productions have included Albert Camus' portrayal of Caligula and Offenbach's hilarious view of La Belle Hélène. “For the most part, though,” says Jesús Cimarro, the festival's Director for the last seven years, “we commission new works.” On average there are eight productions per year. 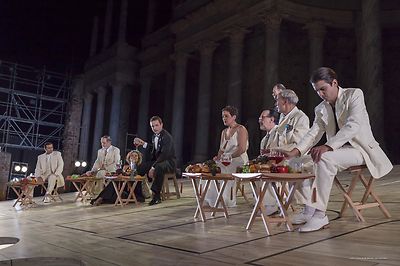 He has no fixed view of how classical works should be presented. While it is possible to be true to the spirit of the originals, even with as complete a remnant as Merida's theatre, the actual conditions of presentation are necessarily very different; social context, familiarity with the conventions, modern lighting, the weight of history itself all make faithful reproduction unsatisfactory. “Our audience are not all experts,” Jesús says, “they have to understand and enjoy what they see and that is hard if we stay very close to the original. A few years ago there was an experiment here by directors to do that but it was too academic and the audience began to leave.” 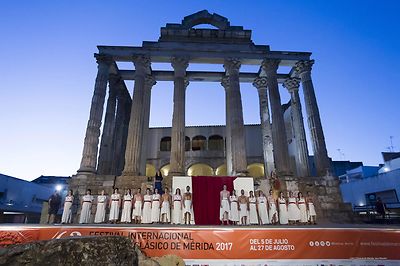 Now he likes to see a mix – there can be masks and declamation but equally there can be the most up-to-date approaches to staging. “It is up to the directors. We like a variety of approaches, including dance and opera – the important thing is to tell the story well.”  The ethos (fine ancient Greek word) of the festival is that the stories from and about the classical period are an endless source of nourishment for writers and audiences alike.

The commissioning process is varied too. “We have a huge stage, much bigger than indoor theatres and 3100 seats to fill, ”Jesús says, “so we always have to start from the beginning with that in mind. However we often work in co-production with other companies or, if we are producing on our own we usually choose the directors and let them pick the writer.” The language is, so far, firmly Spanish or an original language with Spanish subtitles – though Jesús says he is open to the idea of providing English subtitles in the future if it seems feasible.

For local people, growing up in such proximity to the ancient city, the sense of continuity is “in their DNA,” so that the festival does not feel it needs to educate them specifically, though the links to the community are strong. There are Saturday parades with costumes and music and on Sundays there are family shows in the town squares. And before the main festival season there is a separate series in May in which youth theatres present their own shows in the tradition. There is a residential course too, bringing together twenty young people from eight countries, culminating in performances in the Temple of Diana.

Jesús is also President of Madrid's Producers and Theatres Association and so is conscious of the wider role the festival plays in the country's cultural life. Importantly, the festival links up with the National Museum of Roman Art to hold discussions, conferences and workshops.  The end of the festival is not the end of the road for its productions. Also in July and August they tour to other towns with strong Roman connections in the region, Medellin, Regina and Caparra – and in the Spring the previous year's works are presented in Madrid at the Fine Arts Theatre.

The International Festival of Classical Theatre of Mérida is the oldest classical theatre festival held in Spain and is considered to be the most important in its kind.

The representations of the festival's works are held annually, during the months of July and August at the Roman Theatre of Mérida, considered one of the buildings in the world that best represent the solid modes and harmonic forms of Roman architecture in the time of Emperor Augustus. Also, it is the oldest theatre in the world still in use.

In total, 62 editions of the festival have been held, each one of which attracts tens of thousands of spectators, making it one of the most important theatre festivals in Spain.

The Festival began its journey in 1933 with the staging of Medea de Séneca, in the version of Miguel de Unamuno with the actress Margarita Xirgu as protagonist. After another edition in 1934 due to the political tension that was lived in Spain it was suspended until 19 years later, in 1953, when it was restarted with the representation of the work Fedra in charge of a university theatre company.

In 1954 professional theatre returned to Mérida with the representation of an Oedipus by Sophocles played by Francisco Rabal and from then until now it has been celebrated uninterruptedly hosting in its bi-millennial stages representations of the greatest works of the Greco-Roman Classical Theatre.

Between the 58, 59, 60, 61 and 62 editions, the local public has been recovered and the influx of the public from the rest of Spain has been consolidated, turning the summer event into one of the three most important cultural events and of greater repercussion of the summer, according to the national press.

Just 82 years ago, the actress Margarita Xirgu continued with a work that had started over 20 centuries ago: to represent the great Greek and Roman comedies and tragedies on these millenary stones, an honourable witness of the history of the Performing Arts.

On its arena, the most prestigious professionals of the theatre - actors, actresses, musicians, directors, authors, illuminators, costume designers - national and international have paraded throughout its 62 editions, becoming part of the story.

International Festival of Classical Theatre of Mérida on Facebook

International Festival of Classical Theatre of Mérida on Twitter

International Festival of Classical Theatre of Mérida on Instagram

International Festival of Classical Theatre of Mérida on EFA Site