(Written by: Ayelet Dekel) Birthdays, graduations, holidays, festivals and weddings: those dates we mark with a star on the calendar, await their arrival, count the days in anticipation. The Israel Festival is one of those times and traditions, and the Ballet du Grand Théâtre de Genève fulfilled the promise this past weekend with a performance that lifts one up out of the ordinary, into realms of wonder.

The word ‘ballet’ conjures certain visions in the mind of the audience, the company dancers not only possess the excellence inherent in this vision, they exceed expectations, bending and expanding the image of ballet to reveal exciting new vistas. The Ballet du Grand Théâtre de Genève, under the artistic direction of Philippe Cohen, performed at the Jerusalem Theatre on June 7 and 8, 2013. The program consisted of: Les Noces, choreographed by Didy Veldman to music composed by Igor Stravinsky, and Glory, choreographed by Andonis Foniadakis to music by George Frederic Handel.

Glory is an entrancing spectacle, opening with a lone dancer in a sheer black gown emerging from the mists. Moving like a sorceress, she summons up visions: a series of vignettes that gather momentum as the dance develops. Each scene with different configurations of dancers, mood and movement, creating layers of color and sensation, from the spectacular vision of the dancer with her many-paneled skirt held aloft by a bevy of attendants, to the people’s celebration of “Hallelujah” performed in costumes reminiscent of street clothes.

Didy Veldman’s new choreography to Stravinsky’s Les Noces couldn’t be farther from Bronislava Nijinska’s created for the Ballet Russes (premiering in 1923), and yet in its contemporary movement language, incorporating everyday gestures and eschewing pointe shoes for bare feet, it retains a striking fidelity to the original work’s commentary on the social ritual of marriage, translated to our own time.

Veldman’s Les Noces playfully reverses convention and expectations in a captivating dance that scrutinizes the wedding as contemporary social construct. Modern weddings have become a ritual that often seems to dominate consideration of the marriage itself, Veldman makes use of this structure and its popular symbols to reflect attitudes on relationships and gender identity. The bare stage is adorned only by an ultra-contemporary grid of roof beams looming over the dancers, alluding to the ancient connection between marriage and the physical construction of a new home, recalling Sappho’s epithalamium: “Raise high the roof beams carpenters, like Ares comes the bride groom.” The bride grooms in this case are clad in wedding white, while the brides are in black; the caustic commentary creates a dramatic visual effect throughout the piece, with shifting abstract patterns of black and white.

The fast pace and strong aesthetic appeal of this piece, along with the often mischievous tone, are anchored by intricate choreography with pointed, astute observation of gender roles and social norms, and meticulous detailed movement, performed by the dancers at astounding velocity with delicate nuance and verve. Veldman’s choreography announces its intentions from the first, as a horizontal line of women burst into staccato movement to Stravinsky’s intense score, at once fluid, anxious, and precise. The flirty conversations, the carnivalesque high spirits and underlying tensions that accompany a wedding party are all duly noted from the formalities of the receiving line with its dainty air-kisses to the post-party debauchery. In the playful pushes of a feisty duet; in the two dancers – one male and one female – who stand, each alone, on the sidelines watching the company dance; in the female dancer suddenly surrounded by a circle of male dancers whose intentions are not necessarily benign; Veldman conveys the complex narrative of women and men, the dance of desire and attraction, with violence and conflicts stirring beneath the surface. 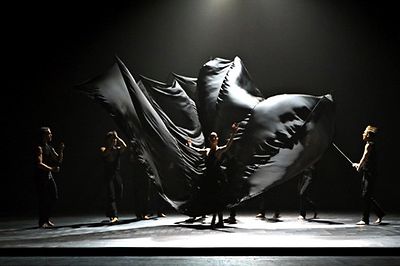