Dubrovnik Summer Festival: the city as a living organism

The City of Dubrovnik's ground-plan drawn on a human heart has been chosen to represent the visual identity of the 64th Dubrovnik Summer Festival (10 July to 25 August). The new visual identity - created by Maro Pitarevic and designed by Marko Šesnic and Goran Turkovic from the Šesnic&Turkovic Studio - portrays the City as a living organism which celebrates and lives art.

“World famous for its unique beauty and history, Dubrovnik is in the first place associated with the city walls. This was the source of our inspiration, extended with the phrase HEART OF ART, because Dubrovnik indeed has a heart of art. At the time when the glorious Dubrovnik Republic flourished, art pulsated within the City walls, and the Dubrovnik Summer Festival brings the heart of art back to life every season,” is how the designers elaborated on the source of their inspiration.

In their own words: “Visual similarity between a heart and the City's ground-plan is stunningly apparent, and for that particular reason it accentuates in the best possible way the connection between the City's architecture and the anatomy of a living organism which lives and celebrates art. The Dubrovnik we talk about is not made of stone but of sheer emotion. We hope that this new concept will inspire the performers to give heartfelt creations and motivate the visitors to experience the Festival not only with their senses but also with their hearts.”

The Dubrovnik Summer Festival, which traditionally takes place from 10 July to 25 August, will feature more than 2000 artists from all over the world. In 47 days, more than a hundred musical, ballet, folklore and other performances will be shown in about twenty site specific venues of the Renaissance city of Dubrovnik.

The extensive theatre programme of the 64th Dubrovnik Summer Festival consists of three premieres, two repeat performances, one remake play and five guest performances. The first premiere is the authorial project by Bobo Jelcic and Nataša Rajkovic entitled Allons enfants featuring - apart from the actors’ team - the residents of Dubrovnik, and portraying the city's present-day. Boris Bakal's project Father Courage, inspired by Bertolt Brecht, develops in several parallel images, taking place in five locations at the same time. Staged by Tomi Janezic, with Alen Liveric in the role of Socrates, Plato's monodrama the Trial of Socrates deals with the questions of conformism and the courage of individuals to think for themselves, the questions of authority and young people, home and exile, the death penalty and death itself. The legendary Vojnovic's and Juvancic's Equinox – the winner of five Croatian Theatre Awards, premiered in 2004 at the 55th Dubrovnik Summer Festival – returns after five years. The repeat performances include Stulli's Kate Kapuralica, directed by Dario Harjacek, and Euripides' Medea, directed by Tomazž Pandur. The Festival will play host to Croatia's Best Play in 2012, I. Š. Kuci's Unterstadt directed by Zlatko Sviben and performed by the Croatian National Theatre of Osijek; the Histrion Theatre Company and the monodrama My Case; the Croatian National Theatre of Šibenik and the adaptation of Molière's The Miser; and the Marin Držzic Theatre with The Brothers Karamazov, directed by Dejan Projkovski. Croatia's first clown play for grown-ups The Nightingale, directed by Lee Delong and performed by the Triko Circus Theatre, promises the festival audience plenty of laughter. This year's programme also includes performances of the Triko Circus Theatre with a number of street-theatrical shows. Entitled Kaleidoscope, this is a work-in-progress project in three seven-day phases. The themes and structure of the shows will change on a daily basis, from «on the move» performances on stilts to street spectacles in the new circus style. The Slovene National Theatre of Maribor will present their acclaimed production of Prokofiev ballet Romeo and Juliet, choreographed by Valentina Turcu. Within the Festival's OFF Programme, the Croatian Writers' Association, the Dubrovnik Summer Festival and Mani Gotovac in the role of project leader created the programme To Love and Cherish You. Named after a verse by Luko Paljetak, the project will present five renowned writers who, each in his own way, talk about love, with each presentation being a small festival premiere. Comprising around 40 screenings, the Dubrovnik Summer Festival's Film Programme is more extensive than ever. It will take place from 11 July to 24 August, at the Jadran and Slavica open-air cinemas. Zlatko Vidackovic, Artistic Director of the Pula Film Festival, has made a selection of finest films from the world's most prestigious festivals, including the Pula Film Festival, and the screenings will be attended by film artists. The programme entitled Filmokaz consists of films based on dramatic works. Art exhibitions at the Sponza Palace continue to be part of the Dubrovnik Festival's OFF Programme. This year they will include Duško Šibl's Two Backward Glances and Jagoda Buic's Carta canta 2.

“Our aim was to offer you an experience of the City as a living organism, which, on one hand, is Croatia's most famous tourist destination, and on the other, an invisible place of emotional images, the timeless echoes of all renowned geniuses who have resided here and visited it, the echoes of the plays, concerts and sounds of the people who have been part of it, who have visited it and who have offered it their finest art. In its stone architecture Dubrovnik has always been hiding that fragile, living heart of the invisible City, which we have also presented on this year's festival poster, created by Maro Pitarevic and the Šesnic&Turkovic Design Studio. We hope that this year's festival moto «walls of stone and heart of art» will be justified,” said Krešimir Dolencic, Dubrovnik Festival Artistic Director.

Within the Festival's varied music programme the Symphony Orchestra of the Zagreb University Academy of Music and numerous soloists will perform the scenes form Verdi's and Wagner's musical dramas conducted by Ira Levin and directed by Giancarlo del Monaco, while the Hungarian Radio Symphony Orchestra and the Kodály Choir of Debrecen conducted by Mladen Tarbuk will perform the programme 1913 – Stravinsky vs. Ravel. The recitals will include that by the pianist Gergely Bogányi, the famous pianist Elena Bashkirova, and the violinist Lana Trotovšek. The mezzo-soprano Dubravka Mušovic Šeparovic accompanied by Dorde Stanetti on the piano will mark the 150th anniversary of the birth of the Croatian opera diva Milka Trnina. The Cantus Ensemble will appear featuring renowned soloists under the baton of Berislav Šipuš, Petrit Çeku will appear as a member of the Elogio Trio, while the renowned Peter Finger will play with Damir Halilic-Hal. Brahms' The Beautiful Magelona will be performed by the bass-baritone Krešimir Strazžanac, the reciter Urša Raukar and Mihály Zeke on the piano. Other highlights include the concert of Rufus Wainwright, one of the young generation's greatest song-writers and winner of numerous awards famous for his original style; jazz concert of Matija Dedic with the double-bassist Scott Colley and the drummer Antonio Sanchez; and the programme Gypsy Swing featuring Mozes Rosenberg, Mate Matišic and Jurica Štelma on the Revelin Fort terrace. On the occasion of celebrating Croatia's joining the European Union, the Music Without Frontiers Foundation from London, the Agavent from Dubrovnik and the Dubrovnik Summer Festival will present Mozart's Così fan tutte in the Art School Park, directed by Sally Burgess and performed by the Dubrovnik Symphony Orchestra under the baton of Oliver Gilmour.

“This year we will mark two important anniversaries: the 200th anniversary of the births of Verdi and Wagner, and the 100th anniversary of the first performance of Igor Stravinsky's The Rite of Spring. The entire music programme is based on the years 1813 and 1913. The two giants of the past will be joined by a great admirer of Dubrovnik, Benjamin Britten, born one hundred years ago. This anniversary will be marked by the Dubrovnik Symphony Orchestra and the pianist Natalia Trull, while the famous Italian cellist Enrico Dindo will mark the 150th anniversary of Claude Debussy performing his Sonata. I would like to confront this music, which determined the course of forthcoming centuries, with the music being composed this year. Through the first performances of works by Croatian composers Klobucar and Seletkovic and the concert of the famous London Sinfonietta, we will try to at least present a short review of the present-day music,” said Mladen Tarbuk, Music Programme Director. 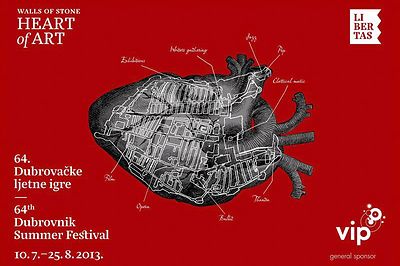