For its 15th jubilee edition, the Yerevan Perspectives International Music Festival presented a remarkable concert in Yerevan. On 13 May, Staatskapelle Berlin with maestro Daniel Barenboim performed a concert at the Aram Khachaturian Concert Hall. Maestro Barenboim, amazing as always, and the orchestra of almost 450 years of tradition, a symbol of highest artistic level, will remain forever in the memory of 1500 wonderful audience members. Daniel Barenboim received the Gold Medal of the Yerevan Perspectives Festival from the festival‘s Founding President and composer Stepan Rostomyan. The medal was initiated by the artistic board of Yerevan Perspectives on the occasion of the festival’s 15th anniversary and is given to outstanding musicians of our time.

Some honorary guests came to Yerevan for the concert, such as Princess Irina Sayn-Wittgenstein, Countess Isabel Hoyos, Count Martin Hoyos, Countess Eva Goess, Count Peter Goess, Countess Felicitas von Schönborn, other respected music lovers, and a group of 21 people who visited the festival academy in Byjurakan on 15 May and enjoyed the performance of Hover Chamber Choir (“The best chamber choir of the world,” as Krzysztof Penderecki says) and Prof. Rostomyan‘s presentation of sacred Armenian music of the 5th century.

The orchestra members of Staatskapelle Berlin were very enthusiastic about their trip to Armenia, the reception of the warm and fantastic audience, the visit of the Geghard Monastery and Garni temple.

Check out the photo gallery of the concert of the Staatskapelle Berlin in Yerevan! 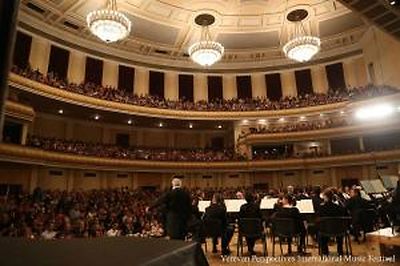