Warsaw might be thought a strange place to start a Spring festival in honour of Beethoven. There seems, on the face of it, to be no connection – other than the fact that there is no city in the world that would not benefit from a concentrated annual dose of his music. The answer is simple enough. It did not start there. It started further south in Krakow, seven years before.

Krakow's Jagiellonian University found itself with an extraordinary cache of Beethoven's manuscripts after the Second World War, including the Seventh Symphony, a sketch for the Ninth, and the last String Quartets. They, and several of Mozart's, are there because they were moved from Berlin's Prussian State Library and hidden in a monastery in Silesia to protect them from the Allied bombing of Berlin and the advance of Russian troops. After the war the territory found itself back in Poland and the scores were added to the university library (founded in 1364) collection, which also houses works by one of the university's ex-students, Nicolaus Copernicus.

Another ex-student is the great composer and conductor, Krzysztof Penderecki. His wife Elzbieta, herself a native of the city and one of Poland's most energetic musical organisers, felt that if the manuscripts were going to be put on public display, then the music should be played at the same time. It still is, with Krakow exhibiting the music and holding at least three of the Beethoven Festival concerts. The festival is placed carefully as part of Poland's (and especially Krakow's) intense Catholic celebrations of Holy Week, always finishing on Good Friday.

The main strands of the event, though, though were lured to Warsaw from 2004 onward, partly because there was political support for a much increased budget, and partly because of the availability of a greater range of musicians she could call on. While it does have support from the city and the state, and the participation of many of the capital's institutions (like the National Opera), it has a mixed income from private sources too. “We can't let standards drop below the best level,” Elzbieta says, “and that takes a high budget.” The commitment to Krakow is still strong, as is the emphasis on scholarship as well as performance. “Along with the concerts we have a two day symposium, which brings us Beethoven scholars from all over the world.”

The association she formed to run the festival once most of the activity moved to Warsaw also has its own quarterly music magazine and artist's management agency. The programme's scope has grown over the years.  Not surprisingly, given the Pendereckis' central place in European musical life for the last half century, the repertoire covered by the festival stretches a long past Beethoven. Although there are not too many days without one of his works in the list, there is a good sprinkling of the composers from fellow composers Penderecki has encountered, like Panufnik, Ligeti, Gorecki, Britten and Shostakovich. “I first met Shostakovich in 1966,” says Elzbieta, “and he became a great friend.” 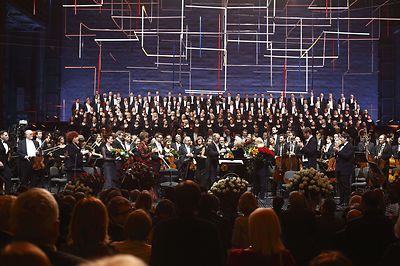 In 2018 Leonard Bernstein's centenary was celebrated, the opening concert of the festival paired Beethoven's Eroica Symphony with Bernstein' Age of Anxiety Symphony – one might say works addressing the same themes of fear and the mistrust of authority 160 years apart. It would have been particularly interesting to hear the concert last March which put Gorecki's Second Symphony, The Copernican (back to the Jagiellonian University link), alongside Penderecki's Polish Requiem – conducted by the composer.

Indeed Penderecki is, like Mahler in his lifetime, just as much known as a conductor as a composer. I remember him conducting an astonishing performance of Shostakovich's Sixth Symphony in Vienna's Musikverein more than fifteen years ago – one of those concerts when you know you have witnessed a very special revelation of the music. This November he celebrates his 85th birthday and that day (23rd), he will spend it being one of the conductors at the final concert of a week-long celebration of his work: a special edition of the festival. I say one of the conductors because he will share the podium with Christoph Eschenbach and Leonard Slatkin. “We wrote to all his old friends, as well as young conductors we admire,” says Elzbieta. “Many had other concerts of course but it has been amazing how many have said yes – so now we will have 21 conductors during the week sharing the evening concerts.” Among them are Lawrence Foster, Jerzy Maksymiuk, Rafael Payare, Maximiano Valdes, Jacek Kaspszyk, Andres Mustonen, “and we begin with Dawid Runtz, who is just back from Tanglewood” - another connection with Bernstein.

Among the performers (plenty of famous ones like Anne-Sophie Mutter and Arto Noras) will be the young orchestra drawn from the students of the Penderecki European Centre for Music, a massive undertaking with a 700 seat concert hall built in the grounds of his home at Luslawice. This small village, about 70km east of Krakow, has a humanist and artistic tradition dating back to the 16th century and, along with the modernist music campus opened in 2013, Penderecki has the old manor house, around which he has planted a 30 hectare arboretum with over 1500 varieties of trees and shrubs.

Next March the Beethoven Festival will be back to normal, “with the best of Poland's orchestras,” but with the addition of the Helsinki Philharmonic, the Tonhalle Orchestra from Zurich, and the Dresden Philharmonic. “I have learned what our audience wants from us,” Elzbieta says. “They want the festival to be an important moment in our cultural life.” 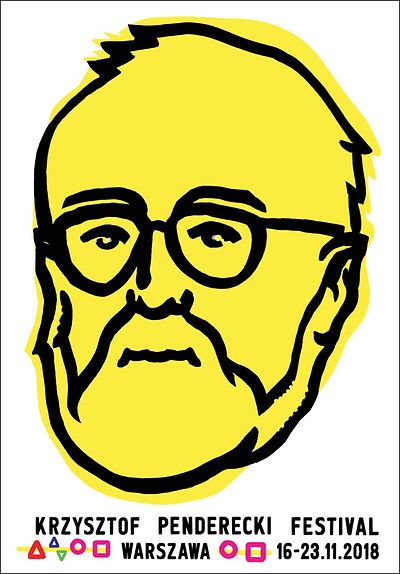 The Ludwig van Beethoven Easter Festival, established in 1997, has become the largest classical music festival and one of the most significant cultural events in Poland. A carefully selected programme is interpreted by the best internationally renowned artists. Symphony and chamber concerts, oratorios, operas and numerous accompanying events, such as the International Musicological Symposium, the Exhibition of Manuscripts and masterclasses for young artists, make the festival one of a kind.