Maestro Krzysztof Penderecki has died at the age of 86 this 29 March 2020. The European Festivals Association is sending its most sincere condolences to Madam Elzbieta Penderecka, the entire family and the Ludwig van Beethoven Easter Festival team.

Maesto Penderecki has been one of the world’s most celebrated composers and conductors with an immeasurable impact and influence on the musical life of Poland and all over the world. Krzysztof Penderecki was a laureate of many artistic prizes in the country and abroad, an honorary doctor at dozens of universities, an honorary lecturer at many prestigious artistic universities, and he also received a number of national and foreign prizes. He conducted leading symphonic orchestras all over the world. His work consists of more than 100 compositions, including intimate solos, symphonies, concerts for various instruments and pieces for operas and oratorio choirs. He wrote music for more than 100 animated, feature and documentary films, as well as for performances for children and adults.

He created film music for among others The Exorcist or The Shining and won four grammy awards. He has been presented and performed by the best soloists in the world, Anne Sophie Mutter, Rostropovich or Yuri Bashmet, just to mention 3 of them. Massimo Mercelli, EFA Honorary member and flutist as well as director of the Emilia Romagna Festival who played the work of and with Penderecki many times says: "We played his music together for several decades, establishing a deep friendship with him and his extraordinary wife Elzbieta. Playing together has always been an experience of artistic and human elevation. Besides that, I remember some personal episodes, as when we went to Karaganda with Darko Brlek [EFA Honorary member and former president of EFA, director of the Ljubjana Festival and clarinetist], where Krzysztof’s parents were being deported to a gulag but were luckily saved by the kindness of Kazakh people. In 2013, after a series of concerts with the Beethoven Academy youth orchestra (established by Elzbieta), Krzysztof conducted his Polish Requiem in Udine for the Brescia e Bergamo Festival. He was interrupted just before the beginning by the sound of the city bells because Pope Francis had just been appointed. The following performance was very mystic and unforgettable. I think his music has been innovative, but with a human face."

Penderecki was born in 1933 in Debica in Poland. Following his studies in composition at the Polish State University for Music and in philosophy and history of arts and literature at the University of Krakow, Maestro Penderecki had a huge influence in the life of many people in Poland. He won many prizes for his compositions and conducting work. He will be missed by artists and many members of EFA who worked with Maestro Penderecki, the entire arts community and way beyond for his works, his creations, his commitments and is contribution to our lives. At the same time, he will be with us forever.

Here are some words from our members and the festivals community:

"We are very sorry that one of the greatest Polish composers has left us during this difficult time. His music will always remain in our hearts." Bratislava Music Festival

"R.I.P. Krzysztof Penderecki. Immerse yourself in the striking finale of his Polish Requiem." Joost Fonteyne, Klarafestival

"Penderecki, who participated in the Istanbul festival with "Polish Requiem" for the first time in 80, won the life success award in 2013. He said his final goodbyes at the age of 86 and was one of the greatest and oldest composers of the 20th century." Istanbul Music Festival

"Our deepest and sincere condolences. Rest in peace!" ReMusica Festival

"So sad to hear that Maestro Krzysztof Penderecki passed away today..." Razvan Stoica

"Penderecki's love for Romantic poetry and philosophy was widely known. In The Eighth there is a feeling of passing away, the creator, poet, composer and gardener." Robert Piaskowski 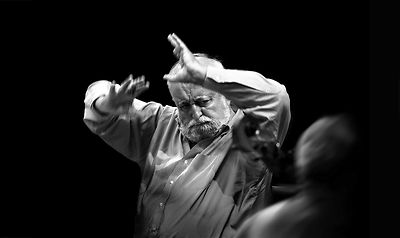